News, reports and articles
New equipment -review of the TR144 PRO transverter from Kuhne Electronics
Up
Posted by OZ1FDH
Tags:

Kuhne transverters are not cheap.  With prices around 1300 euros, for most amateurs who owns one, they are probably the most expensive pieces of auxillary equipment in the schack. Thus they are not something you purchase every now and then, but are they worth the money, and can they stand the technological evolution of 10+ years?

This article is the first part of a review of the new TR 144 PRO transverter. Focus for this article is on the specifications, practical setup and use as well as on air performance. In the second part, to follow in a month or two, more extensive measurements of the RX and TX parameters will be made.

For 10 years, I have been using a Kuhne Electronics transverter for my 144 MHz station. For a while I had TR 144h, but I upgraded to the TR144h +40 in 2008. I have really been happy with this transverter. It has worked flawlessly throughout the years and has been a very important part of the 5P5T station, a setup which has earned us both a 1st, 2nd, and 3rd place in the region 1 VHF contest.

My first reaction when I saw that Kuhne were introducing a new 144 MHz transverter, was that I already had the perfect transverter, and had no reason to upgrade. However, taking a closer look I could see that there were more changes than just a little better phase noise and IMD. There is now a 2nd rx output on the IF side, antenna as well as IF connectors can be setup for any configuration of RX and TX, all transverter settings are now controlled by a build in microprocessor and remote control to name the major changes. The idea behind this design is to allow for a higher flexibility and versatility with modern HF and SDR radios. Thus, after a while I changed my mind, and got permission from my wife to obtain this extremely important piece of equipment. With a heavy heart I put the TR144 for sale. Fortunately, I was happy to see that it found a loving and caring home at OZ7UV, Svend.

The TR 144 PRO comes as either a 14 MHz or 28 MHz IF model. If you aim for lowest phase noise, you should go for the 14 MHz model. The manual is written in a clear language in both English and German, and it even includes some German humor in a few places, such as “Lesen Sie das Handbuch des Steuertransceivers

” –nedless to say this will be a common expression among the 5P5T crew for years to come. Without trying to sound like a grumpy old man, one issue with the manual is the text font. You really need sharp eyes to read this without an extra effort.

I send in the order to Kuhne on a monday and was very pleased to have the transverter delivered already on thursday the same week.With great excitement I unpacked the TR 144 PRO transverter (or in more precise words “I got my new toy”). Everything was nicely and secure packaged. TR 144 PRO is built in the same chassis as previous transverters from Kuhne, but now has an LCD display, why the appearance is quite different. The basic design of the RX and TX chain is identical to previous models. The main technical changes in the TR 144 PRO is a redesigned LO with even lower phase noise, LDMOS in the PA and a temperature controlled blower. 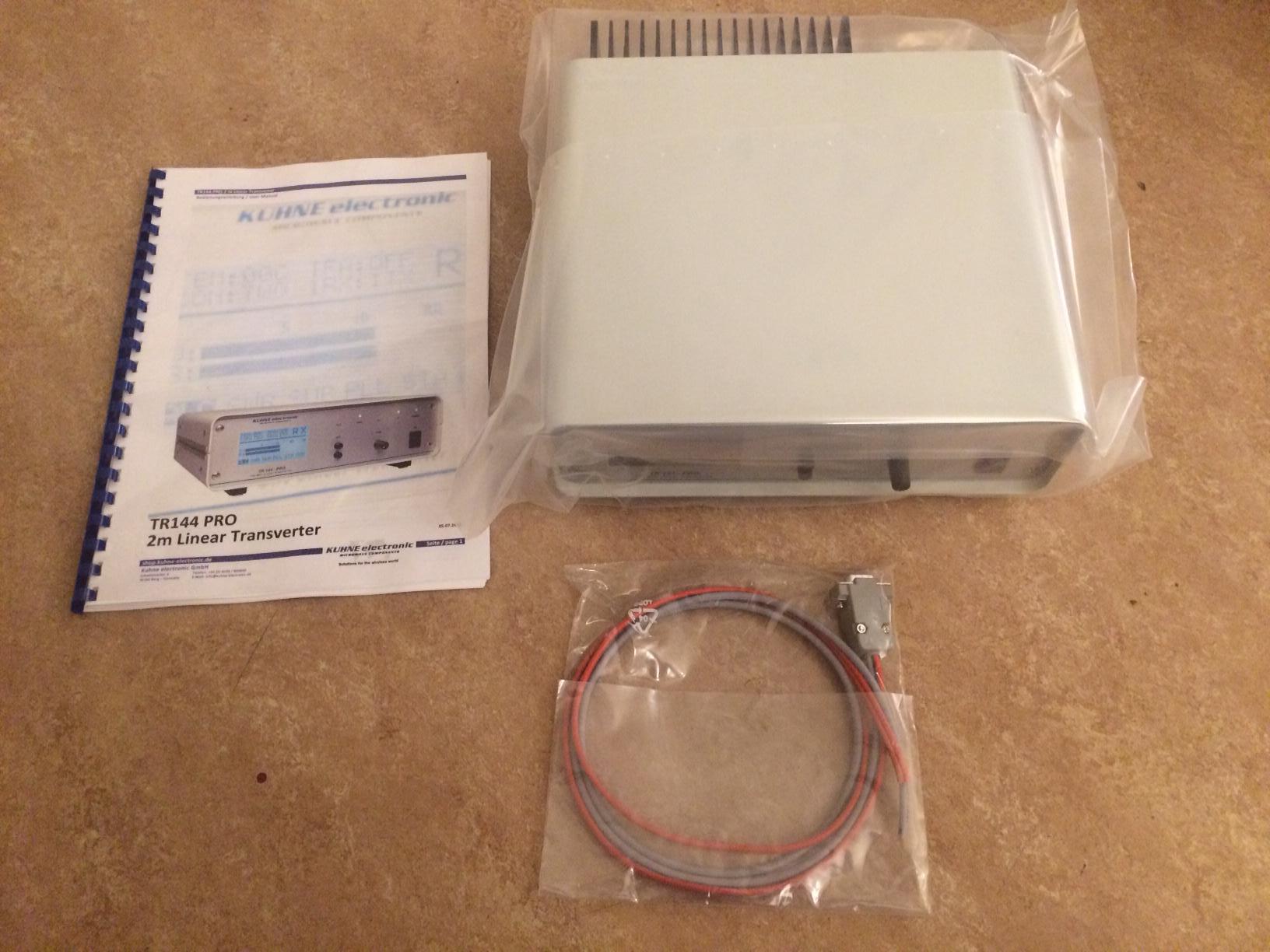 Figure 1. The transverter unpacked with cables and manual 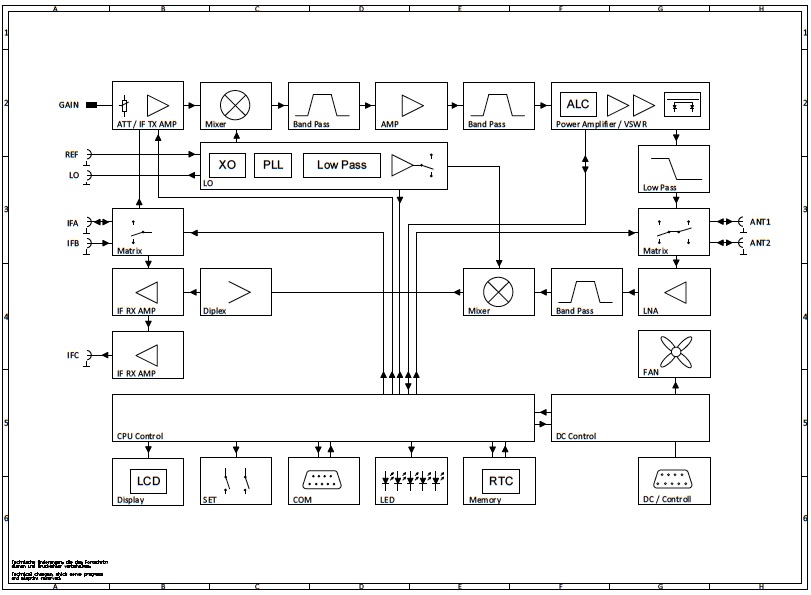 You can set up the TR 144 PRO for almost any antenna or IF setting. Separate RX and TX is possible both on the IF and 144 MHz side. Furthermore, there is a separate IF RX output which can be used for e.g. the 2nd operator receiver during contests or a wide band SDR receiver for EME. The TX input can handle any level between 60 uw to 50 mw. Adding to this, also a 116 MHz local oscillator output and a 10 MHz reference input. My HF backend is an IC 7700 which has a 10 MHz reference built in. Unfortunately, the TR 144 PRO requires a 0 dBm input at 10 MHz, whereas the ICOM transceivers only has -10 dBm output. You can of course amplify the 10 MHz signal with an external amplifier, but it would have been better, if the TR 144 PRO had been fully compatible with the ICOM standard.

Connecting and setting up the transverter is straightforward. You can change all the settings via the two “SET” buttons on the front, just as the input level can be adjusted via a potmeter at the front. No longer do you need to open the transverter in order to set it up. The ”SET” buttons have different functions but are not numbered, which would have made the setup easier. The function of the "SET" buttons change depending on the menu, and it takes a little time to get used to it. 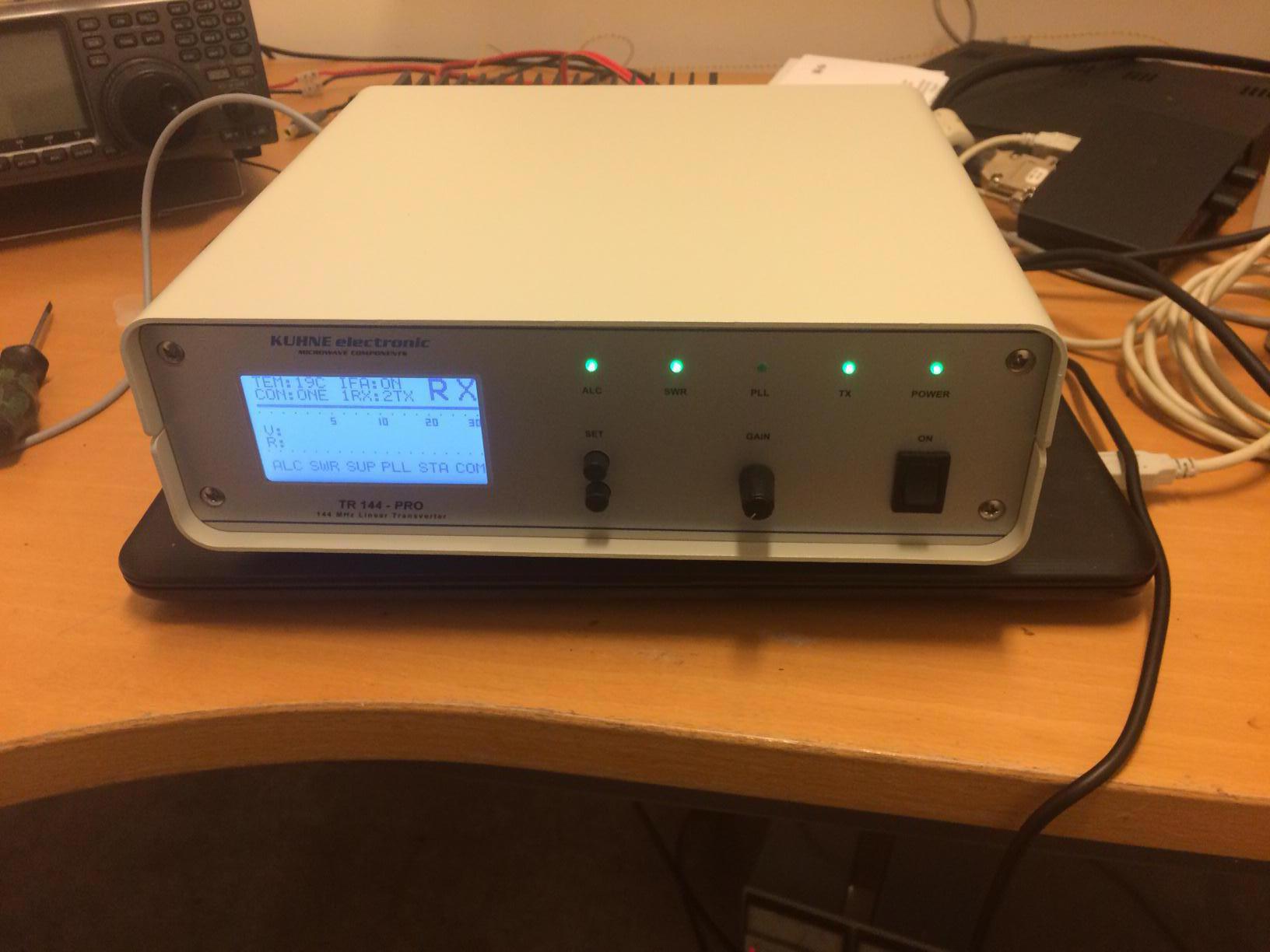 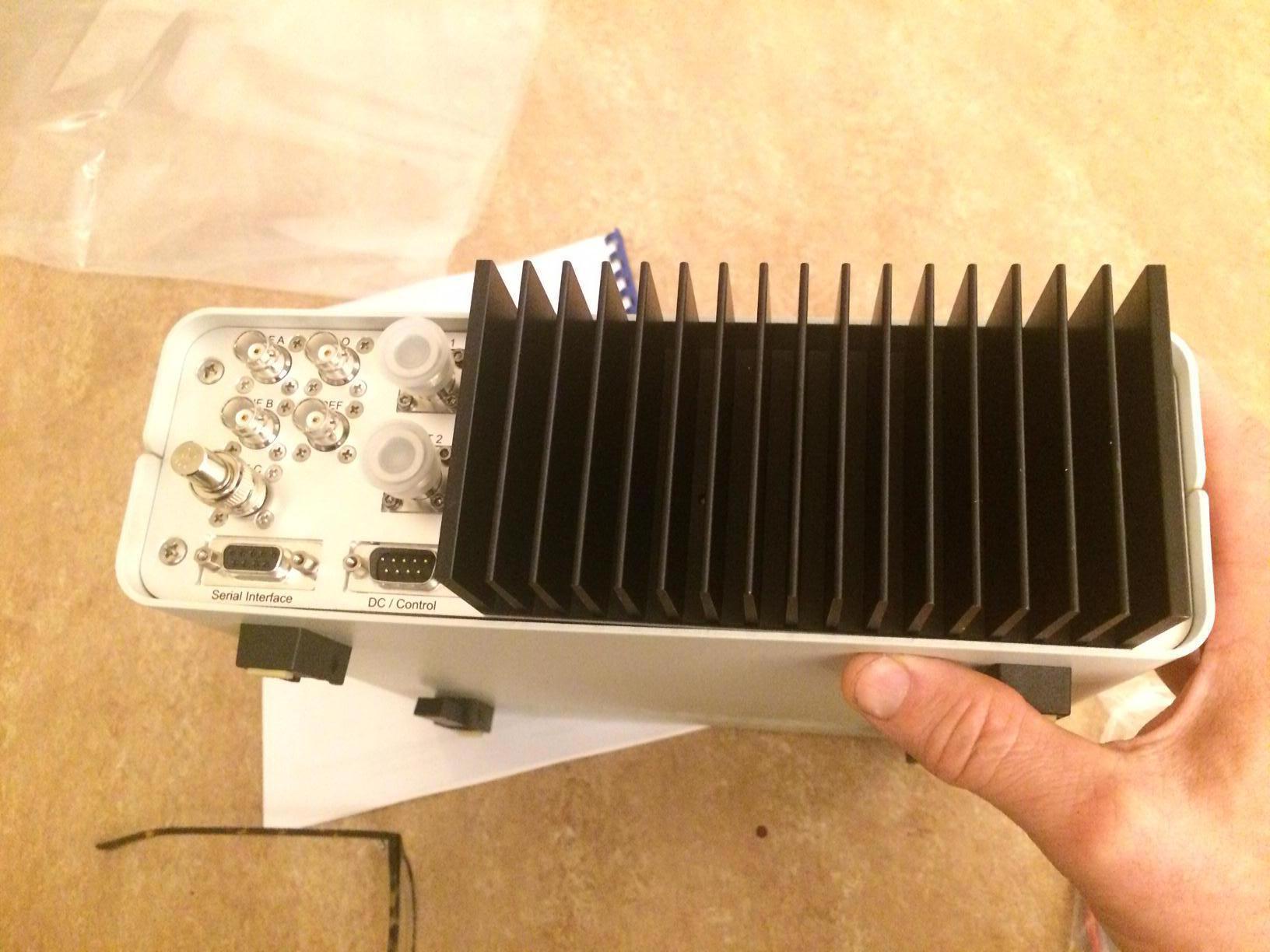 Figure 4. Back side of transverter

The build in sequencer has separate lines for both PA and antenna relay, and you can also separately delay the TX line in the transverter. The transverter sequencer comes with a 20 mS delay for all settings. You can adjust the delay from 10 mS to 200 mS. Previous transverter models had a 50-70 mS fixed delay. This has worked perfect for my setup with various antenna relays, if in doubt I recommend to set the sequencers 1 and 4 60 mS and 2 and 3 for 10 mS. Also, note that all DC and sequencer wiring is identical to the previous models. The LCD display shows the forward and reflected power, the RX and TX settings as well as transverter temperature. The contrast of the display could be better, and it can be a little difficult to read at all angles.

On the air testing found that the TV 144 PRO, as my previous Kuhne transverters works perfect without any glitches. Comparing the bar graph to my Bird wattmeter, I found that the they were within 1 watt of each other. You should not go beyond 25 watt output in order to keep the IMD low. Testing with neighbor amateurs gave very good reports on the transmitter, “as clean as it gets” was the most common report. On the RX side the on-air performance was also very good, and the transverter felt invisible when connected to my ICOM 7700, just as it should be. The RX converter gain seems less than the TR144h +40, but coming measurements will have to show, if this is real or just my imagination.  Whether or not you yourselves can tell the lower phase noise on a crowded band during a contest, compared to the older models, may be questionable, but your neighbors will probably appreciate the slightly better IMD and lower phase noise. The high flexibility in input-levels as well as RX and TX lines means that the transverter easily can be adjusted if you want to put in a filter or similar in your RX or TX line. In this aspect the TR 144 PRO is ready for the future. 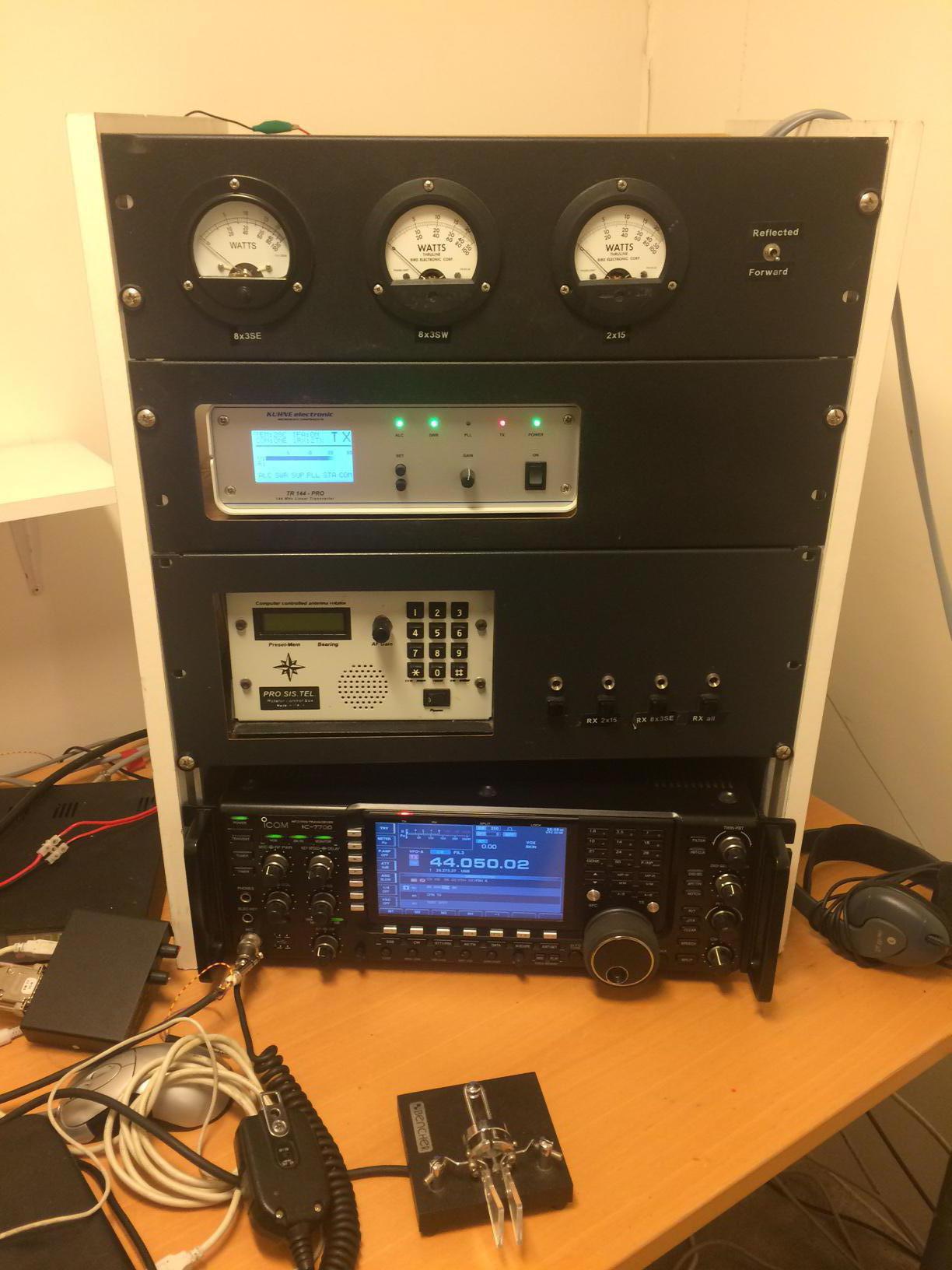 Figure 5. The transverter installed at the station.

Using the transverter for tropo and aurora work, it worked without any problems at all. On the RX side this is a very “quiet” transverter, where the signal levels are very well adjusted. I live 3 km from a UHF TV transmitter, 15 km from a VHF TV and FM transmitter and 600 m from a GSM mast. I have a mast mounted pre-amp, and even with full 20 dB preamp gain there was no interference from any out of band signals.

As described this is not a cheap transverter, but upon the first impressions of setting it up and testing the transverter on the air, you do get the quality you pay for. The TR 144 PRO will most likely continue to be a top-of-the-line equipment for more than a decade. The only thing I really missed was a reference input  fully compatible with the ICOM transceivers. The microprocessor controller is a first for commercial transverters. Kuhne has already send out updates for the controller software, and it will be interesting to see if they can use this feature to keep the transverter up to date with the technological development of the transceivers.

Whether or not you need all the features of the TV 144 PRO is up to yourself, but it is indeed a nice piece of equipment.

Next part of this review will include a measurement of the TX parameters as well as the whole TX line of the 5P5T 144 MHz setup. You can read it here.