2007-2016, with this years contest the 5P5T team have been active in the region 1 VHF test for 10 times in a row. Thus the 2016 test was something special. The team this year was OZ1GER, OZ1IKY, OZ1FDH, AG6QV and PA5DD or in other words Birger, Kenneth, Claus, Frank and Uffe. As usual AG6QV Frank had flown in from Los Angeles for the occasion. 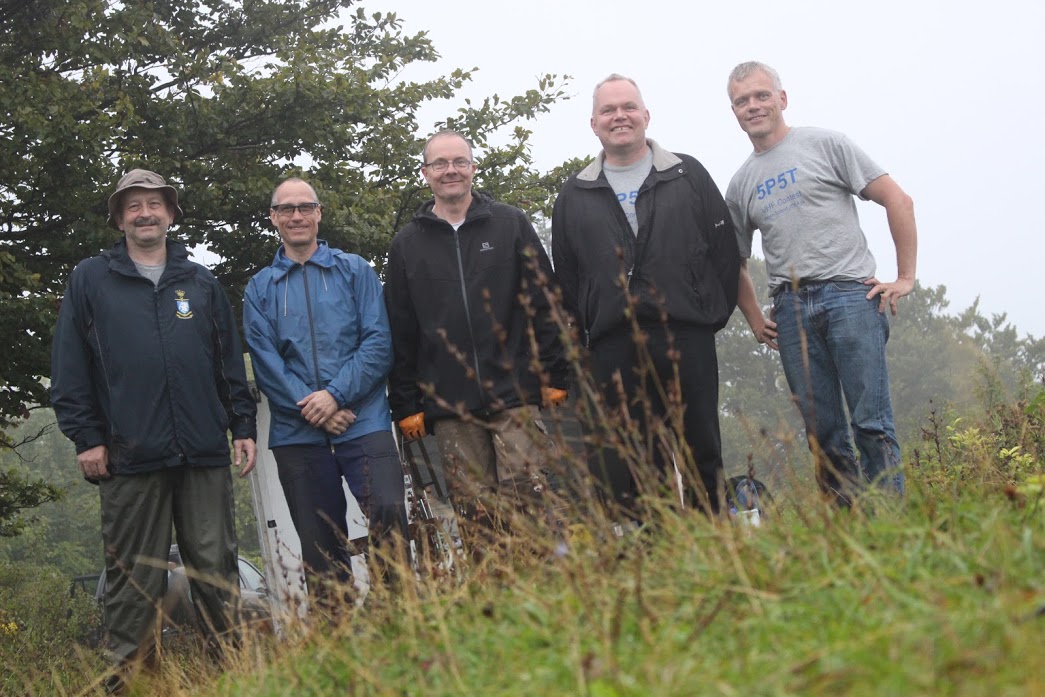 Prior to the contest we had modified the station setup, reducing the number of boxes and computers to a minimum. Simplicity and overview are the keywords. All the necessary functions for the 1st and 2nd operator can now be controlled from their keyboards. Another important contribution was 5P5T t-shirts!

The big challenge every year is transporting the equipment the last 300 m to the top of Kongsbjerg. On a rainy day it is a muddy limestone cliff, turning all the trails into liquid soap.

To haul the 1,5 tons trailer to the top of Kongsbjerg, the big Range Rover we had used in previous years was no more, and we had to make do with OZ1FDH’s, much smaller Freelander. However, given enough speed and momentum you can move anything. OZ1GER put the pedal to the metal, as you can see video here, and the generator made it to the top. 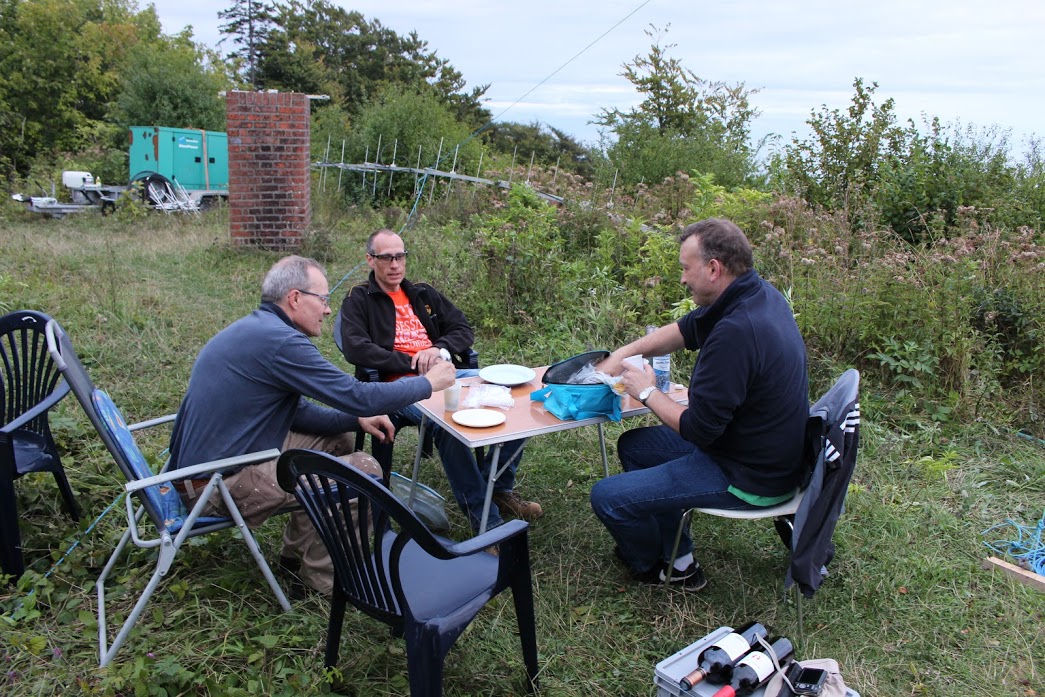 Friday evening, OZ1IKY preparing the mojitos. A very important part of the preparations. Bottles of "red juice" can be seen as well.

The list of equipment failures ecountered during the setup were the usual suspects. First there was no plate voltage on the PA, that was an easy fix, as we simply replaced the high voltage fuse. Next the driver PA triggered the 220V protective relay, and the first solution was just to omit the ground wire –not a good idea. Soon the smell of burning electronics filled the trailer, and we had to set up the back-up driver PA. Last we powered the full TX line, and quickly a sweet smell of electrocuted 7/16 connectors filled the trailer, the fault was quite obvious as can be seen below, luckily spare connectors were at hand. 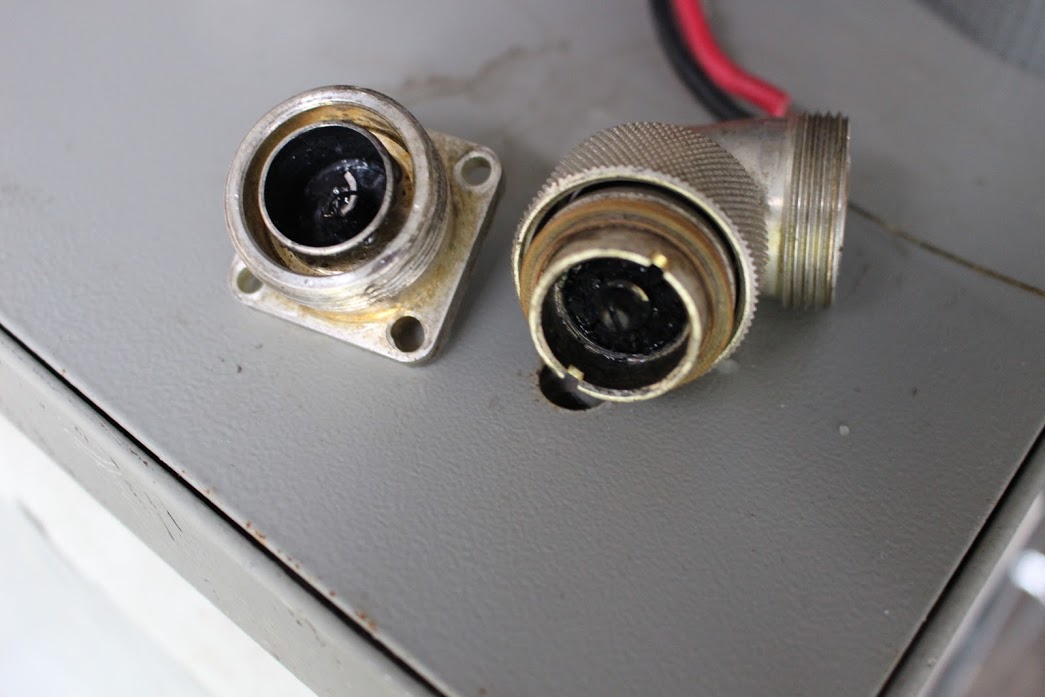 Electrocuted 7/16 connectors. A faulty chassis connector initiated the burn out

Thus it was time for a cup of coffee.

About an hour before contest start, we tested all details and got good reports from local amateurs making sure that the TX signal was clean. We talked to OE1W just prior to the contest start, they were solid 59, things seemed to be running well from down there. 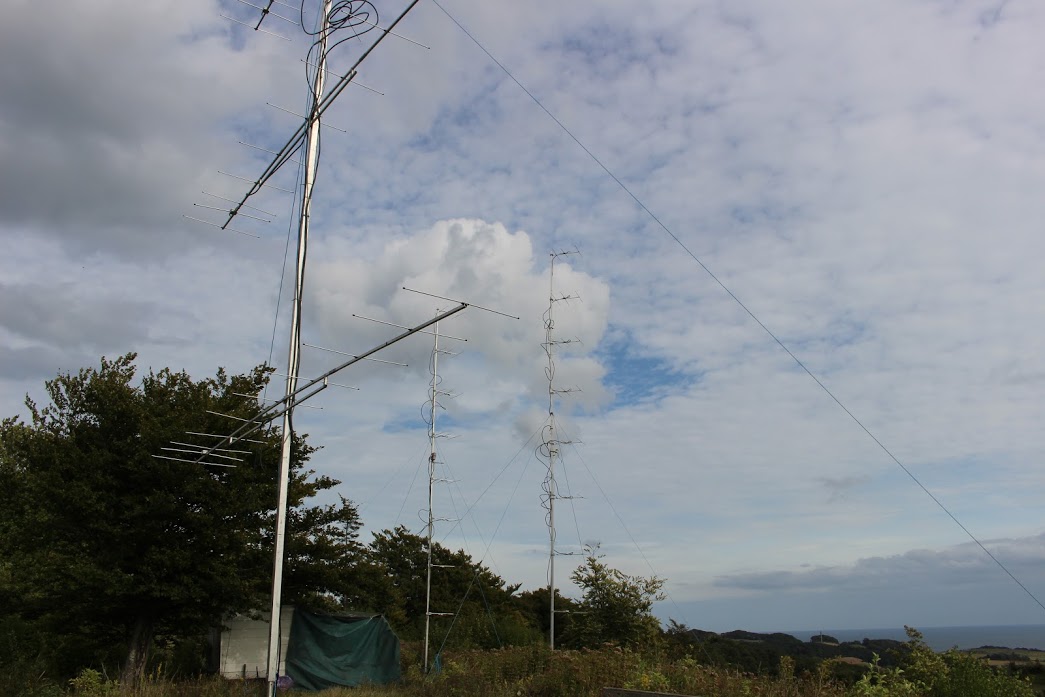 The test started in good order, with 95 QSOs the first hour, which is good from up here. The equipment was working smoothly and we were blessed with good weather on saturday afternoon. A video with tour of the station can be seen here.

The signals were quite good the first couple of hours, and compared to last year we did not see the same drop in activity after the first six hours had passed. It does seem tough that the 6 hour class have injected some new dynamics into the contest. 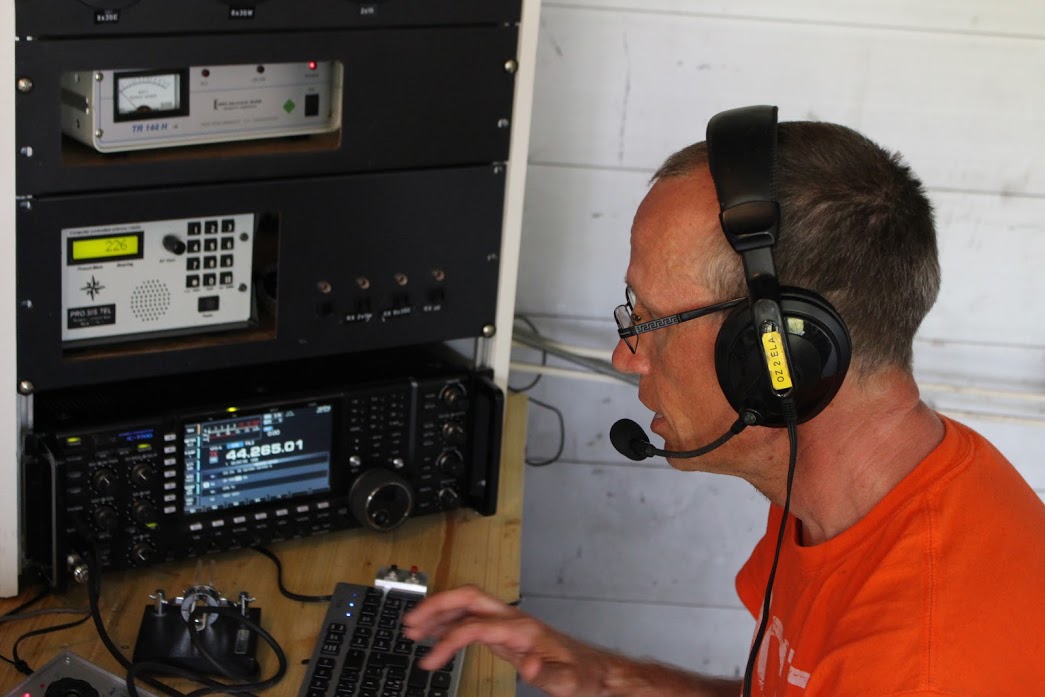 PA5DD at the station during the first hour of the contest.

During night hours we started to search and pound and managed to work among others IO2V, 9A2L and ODX TM0W 1030 km. The QSO rate was quite good and we reached 400 QSO´s around 20:30 gmt. This normally indicates a total QSO number of 800, but then the weather changed.

A front was passing with heavy rains, thunder and fog during the last 12 hours of the contest. We were in the middle of the clouds and it felt more like being in the Alps than being in Denmark. Conditions also dropped like a stone with S9 electric rain on and off. Sunday was rough and it was hard work to dig out the stations calling.

Surprisingly few stations (1 only) were worked from LY and YL in the contest. We have a direct path over water to the baltic countries and an antenna fixed in their direction. Were the conditions that bad or the activity just not there? 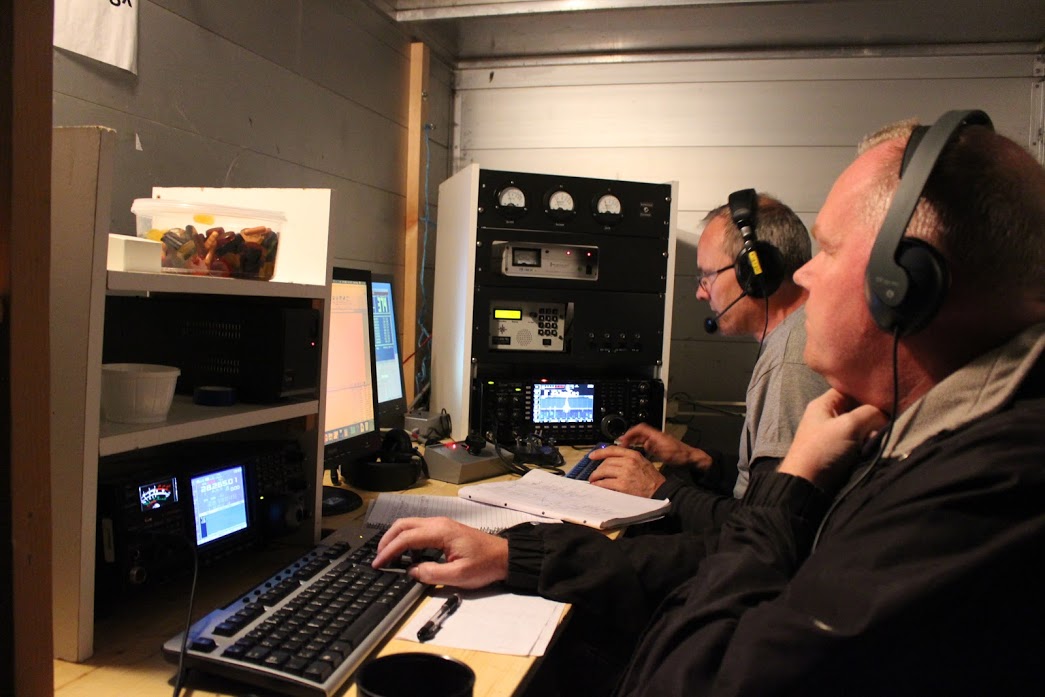 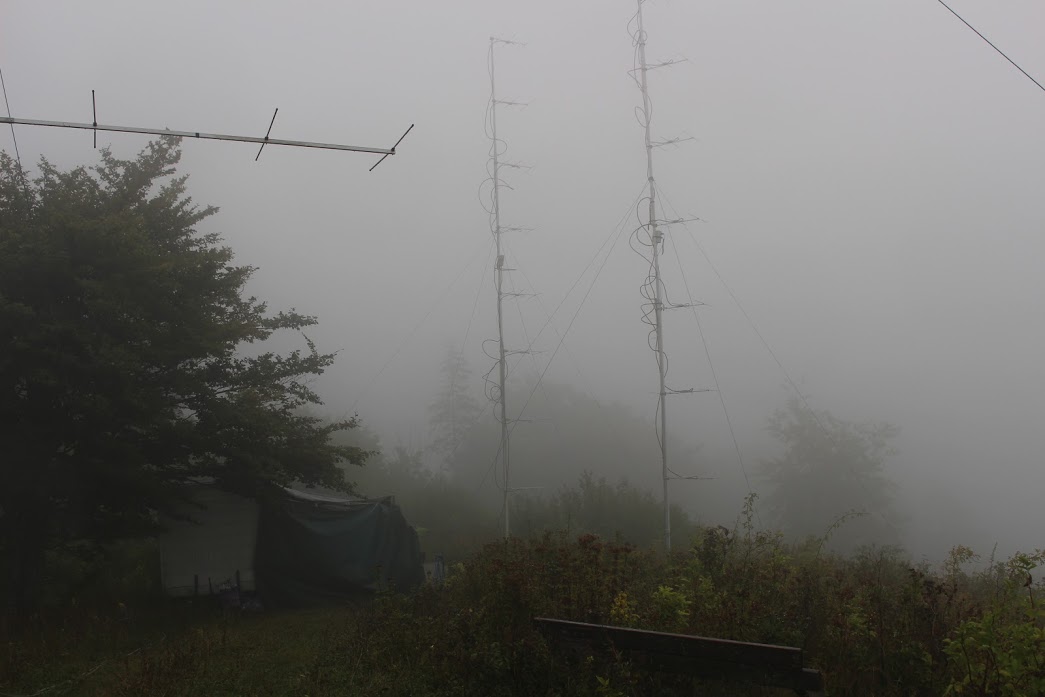 Regardless of the weather it was good fun, and the total count was 717 QSO 95 locators and around 355K QSO points. Another fun contest weekend had ended, this was our 10th september contest in a row, we will be there for 10 more! 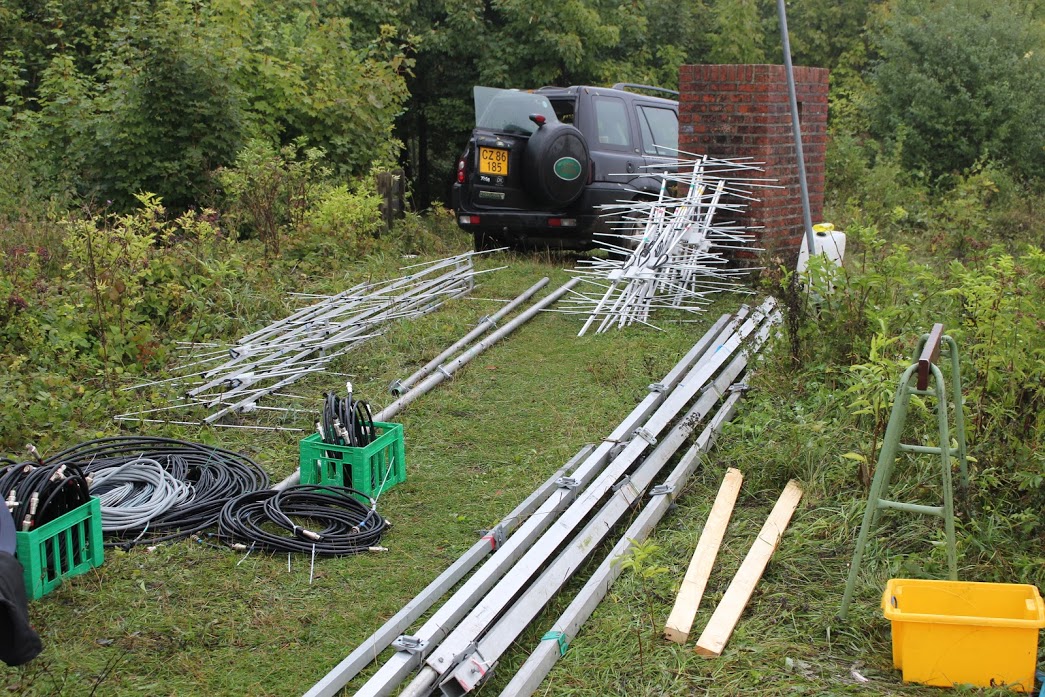 After the contest, all the aluminum ”stuff” ready to be packed