A different year
The year 2020 has been the year of anomalies, also for VHF-contesting. With the covid pandemic and the IARU Region 1 shut down of multioperator contesting in the spring, the question was if there would be a September contest at all. A number of individual IARU member states had opened for multioperator contests in the late spring and early summer, but IARU was still taking a cautionary approach. Furthermore, in the weeks leading up to the contest the infection rates were rising and maybe PA5DD Uffe could not join the team due to travel restrictions, and definitely AG6QV Frank would be locked down in the US.
It turned out OK, IARU decided under the extraordinary circumstances not to impose their own rules but would leave it up to national guidelines and the individual member organizations whether or not to allow multioperator contesting. For OZ we were in the clear, but of course we also asked ourselves if it would be safe to participate in light of a covid infection risk, but after consulting with medical experts the message was that a small group with outdoor activities and social distancing had very little risk of contamination. Thus, we decided to go all in, nothing less for the 14th time in a row since 2007.

The team for 2020 were OZ1GER Birger, PA5DD Uffe, OZ1FDH Claus, OZ5BD Bjørn and OZ1FTU Søren. As usual we arrived on Friday, and enjoyed lunch in Klintholm harbor before we started setting up the equipment at the Kongsbjerg site. No major problems and we could sit down for the friday evening drinks, dinner and wine. A major surprise was that PA5DD very much enjoyed and loudly praised the vegetarian dish prepared by OZ1FDH, but then again it was a really good wine. 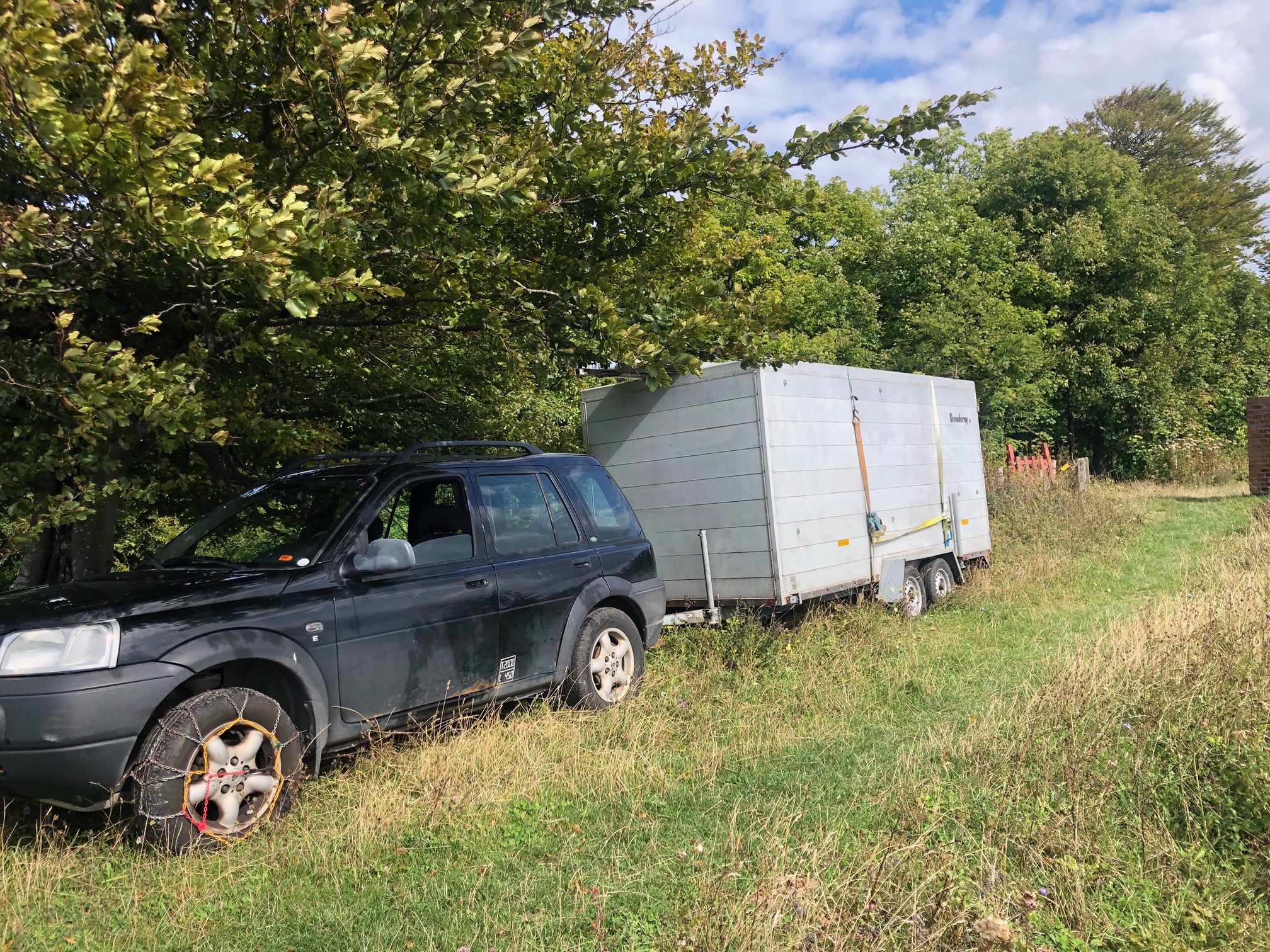 The eagle has landed. The old Land Rover and the trailer safely on the top of Kongsbjerg

In the early hours of Saturday morning we had heavy rains, the temperature dropped and we were of to a wet breakfast and continued setting up the equipment. The antenna setup is a phased antenna system of 3 8x3 el with a 150 deg. horizontal beam width. In parallel we had 4x10 el vertically stacked on a rotator. The phased array works very well with a uniform pattern and broad coverage with approx. 16 dB gain. You can read more about the setup here.

The phased array has the masts placed in a circle with a radius of 180 cm, thus there are a lot of cables and guy ropes that needs to be in the right place. There were the usual small fixes, a broken antenna element and the re-soldering of a connector on one of the combiners. OZ1GER was the site master and we got all antenna systems up in good order. 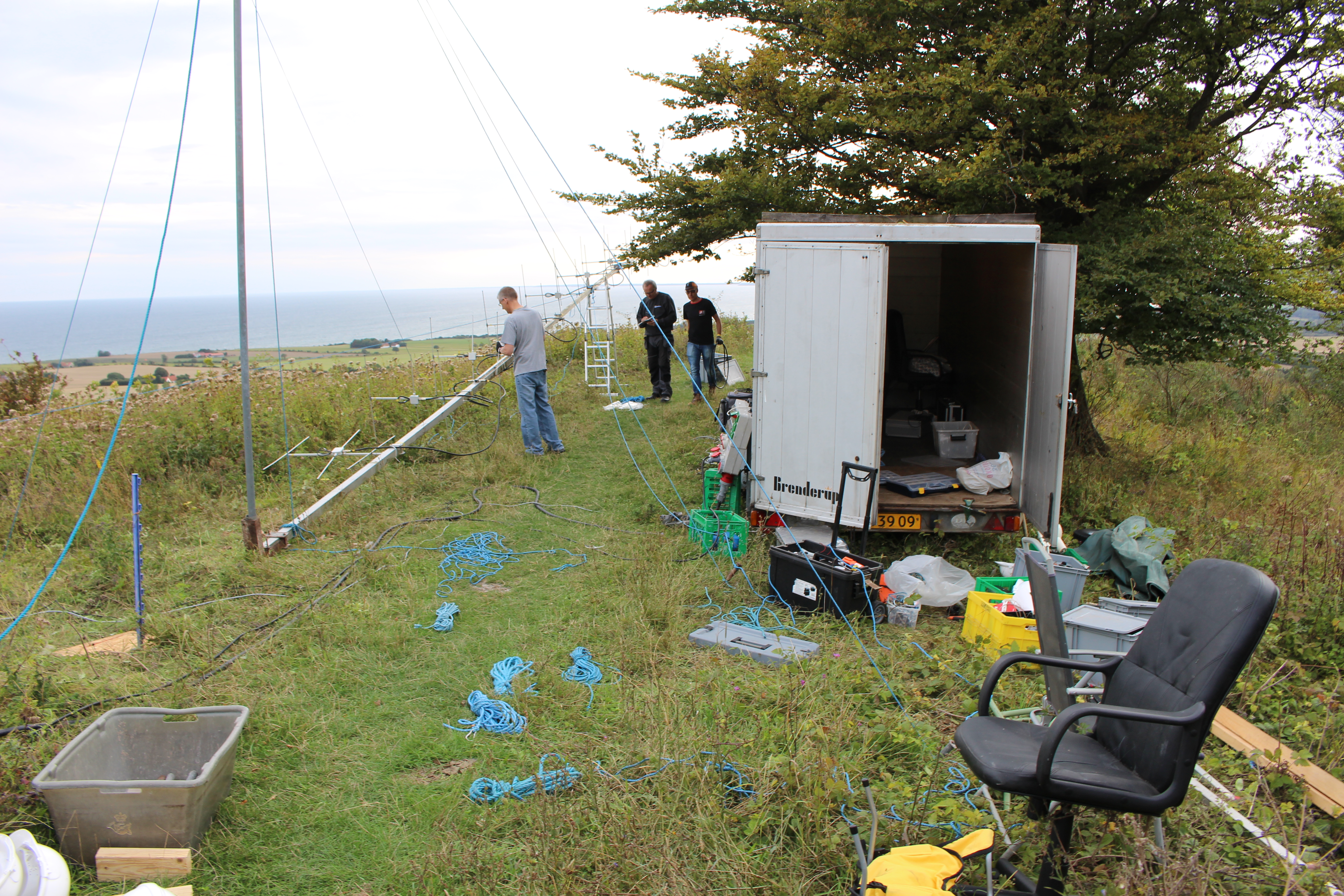 The very beginning, some good hard work ahead 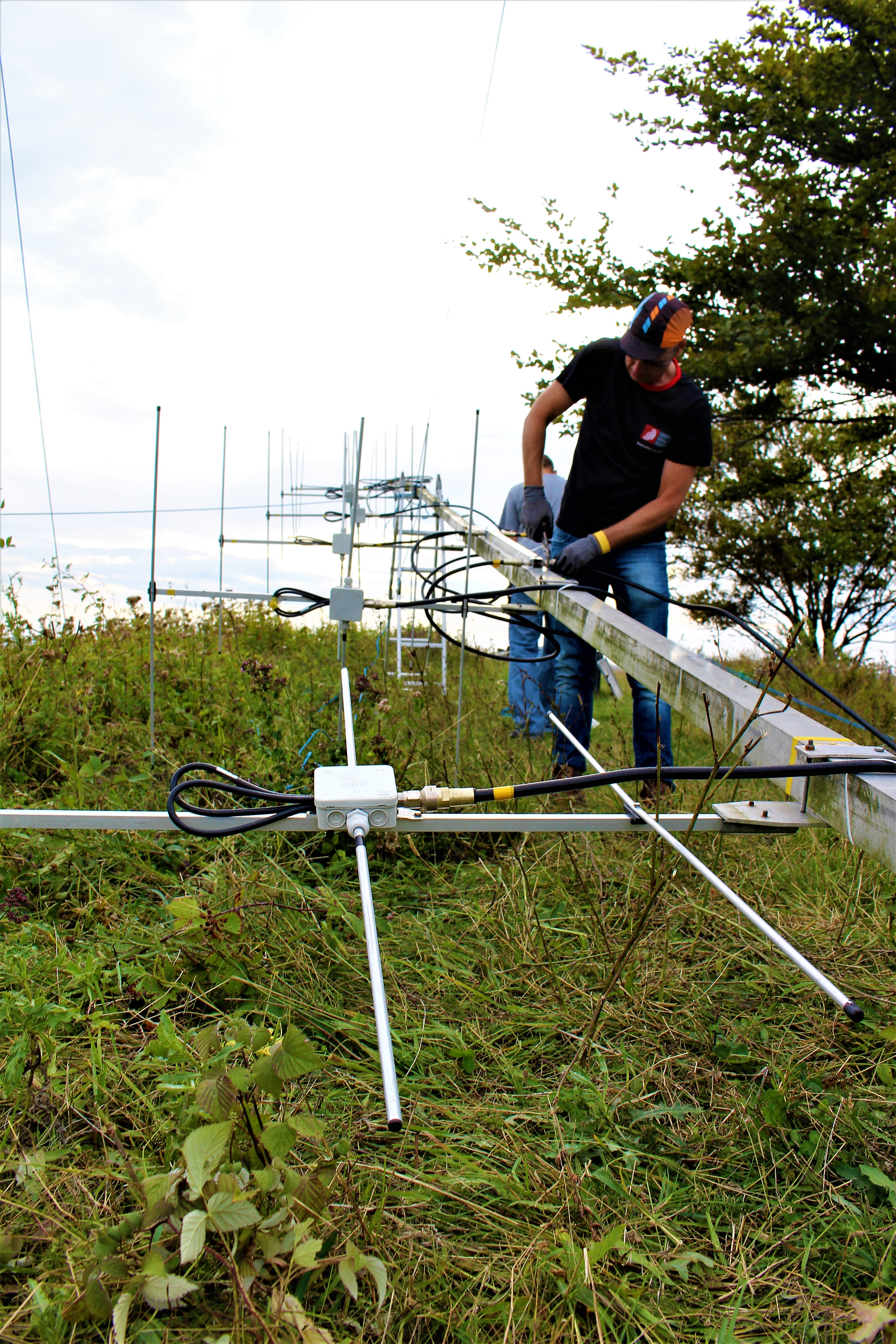 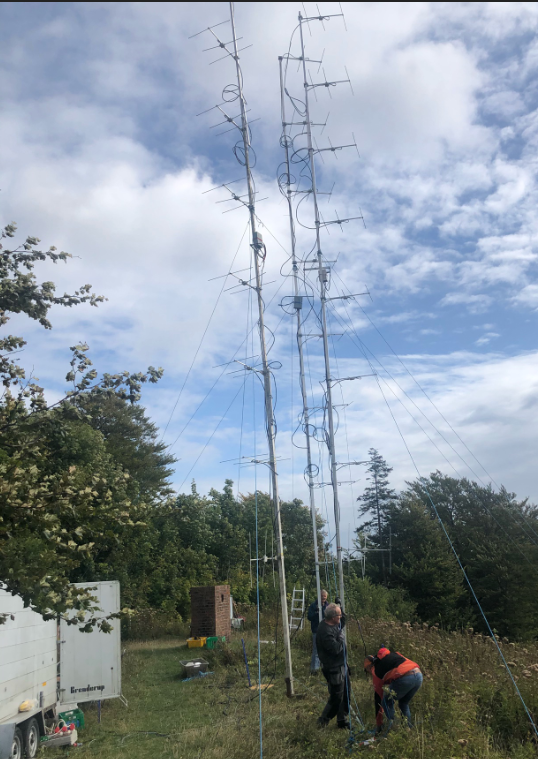 All 3 phased arrays in place.

But, not so small were the PA problems. During the warm-up and testing one PA let out smoke and permanently gave up and another seemed to be working but with only 20 W output. The time for the contest start was approaching fast and we had to dig out “old rusty” the 4cx1500 PA build by OZ1FDH in his student days more than 30 years ago. Despite not having been in operation for years, it was still functioning.

Horses enter the game
The weather on Saturday was not the best, showers were coming and going and OZ1GER decided to set up a tarpaulin for cover. Immediately it was clear that the tarpaulin came from the farm of OZ1FDH. The previous use of the tarpaulin became evident, as a delicate and pungent odor of fermented horse manure filled the site. It more than felt like the good old days when the OZ1FDH wife’s horse trailer served as operating room, but this was at whole different level of eye-watering pungent odours. 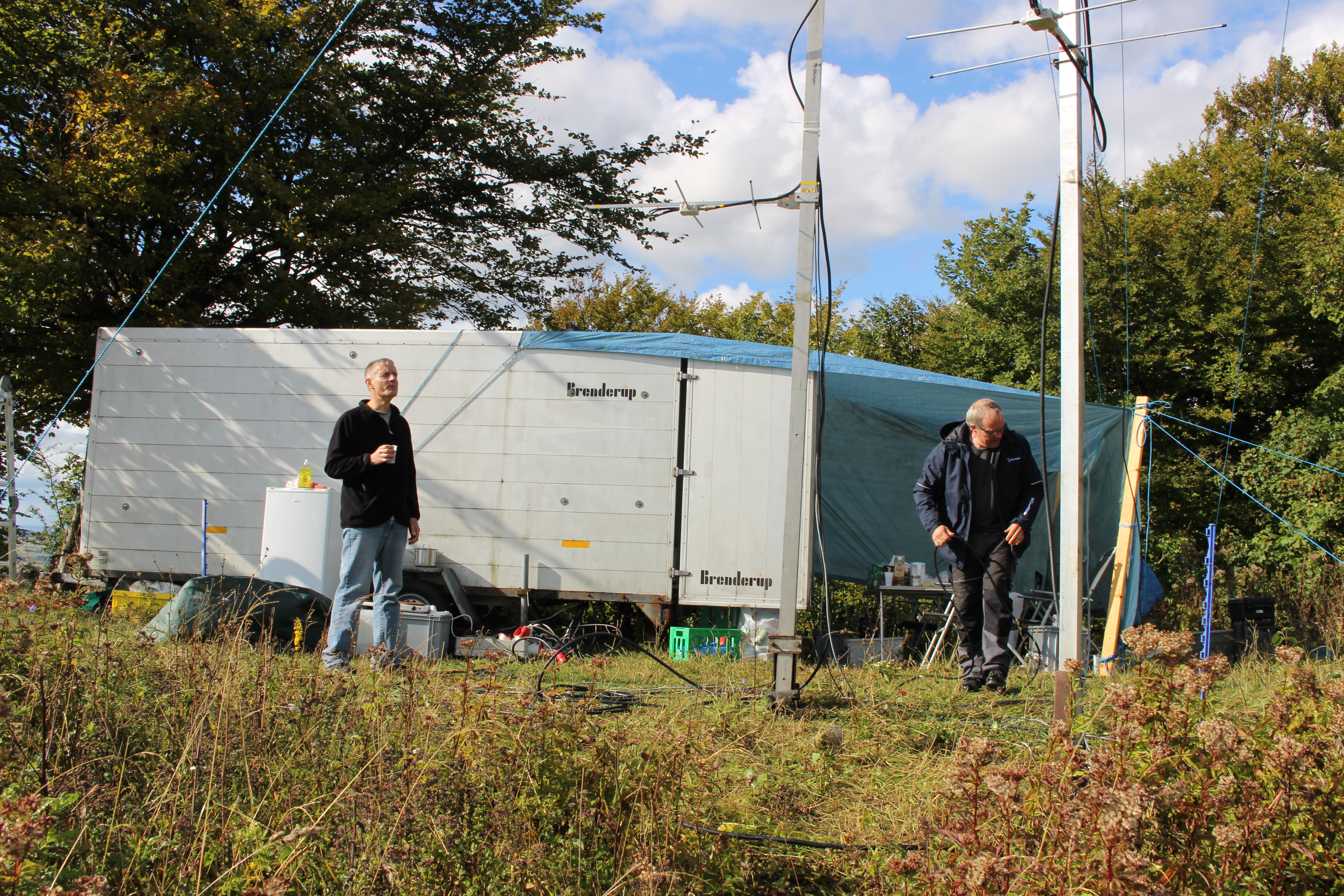 Radio camp. OZ1GER and OZ1FTU in front of the radio trailer and horse odour emitting tarpaulin.

A bumpy start and more fixes
The contest started with an amputated setup of only 2 out of 3 systems TXing. PA5DD Uffe was at the mike, and it wasn’t long before he reported that the antenna pointing south west was completely deaf, SWR was fine but the RX was not working. A few minutes later he reported that the RX was fine for a short while, but then it went deaf again. This was really not a smooth running station. The first hour gave 72 QSOs dropping to 46 QSOs in the second hour, not impressive.

OZ1FTU and OZ1FDH looked at the PA with a low output and found the cause to be a detuned input circuit -an easy fix and 2 hours into the contest we now had 2 systems working fully and 1 with a temporarily malfunctioning RX, probably due to a periodical relay failure. But reaching the relay would require that we took all three antenna systems down because of all the interlocking guy ropes, which was really not an option.

Having a 80% fix for the PAs, we could start looking at another problem, we apparently had a distorted modulation. Working a little back and forth it turned out that the LDMOS driver PA was the cause. Luckily enough or because we were prepared, there was a spare RF-concepts transistor PA modified with an OK1VPZ bias circuit, and we got good reports again. The malfunctioning driver PA of course worked perfectly fine when tested back home after the contest.

The contest itself was running OK. We could feel that systems were not 100%, but it worked and we started picking up on some of the lost QSOs during the first hours, but we it was clear that we had an amputated system. Conditions were at a normal level during most of the contest, the eastern direction was really an uphill battle, but from south to west it worked pretty well. Then around 23 GMT the conditions really changed quite some. Initially we thought that OZ6TY just 40 km away was all over the CW band with 59++ signals, but it was German stations 600-800km away. Especially the portable stations were extremely strong, what a surprise party to keep the operators awake. We also got a few S5 and 9A stations made into the log, with 9A2L being our ODX. Another good DX was UR7D, whom we have worked every time for the past many years. GM4ZUK/P was booming for quite some time, but he was the only GM station we managed to work. Only to F stations were heard and made it into the log, maybe covid played a role by less activity, but still it was a low number compared to earlier years. 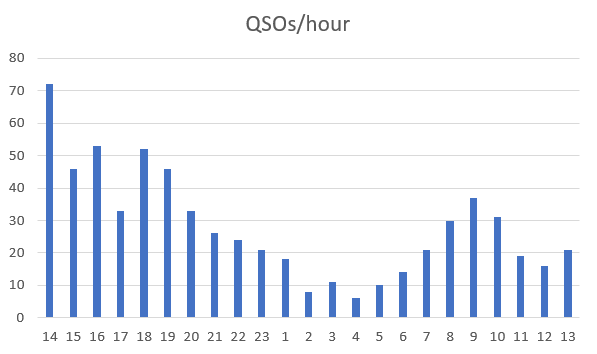 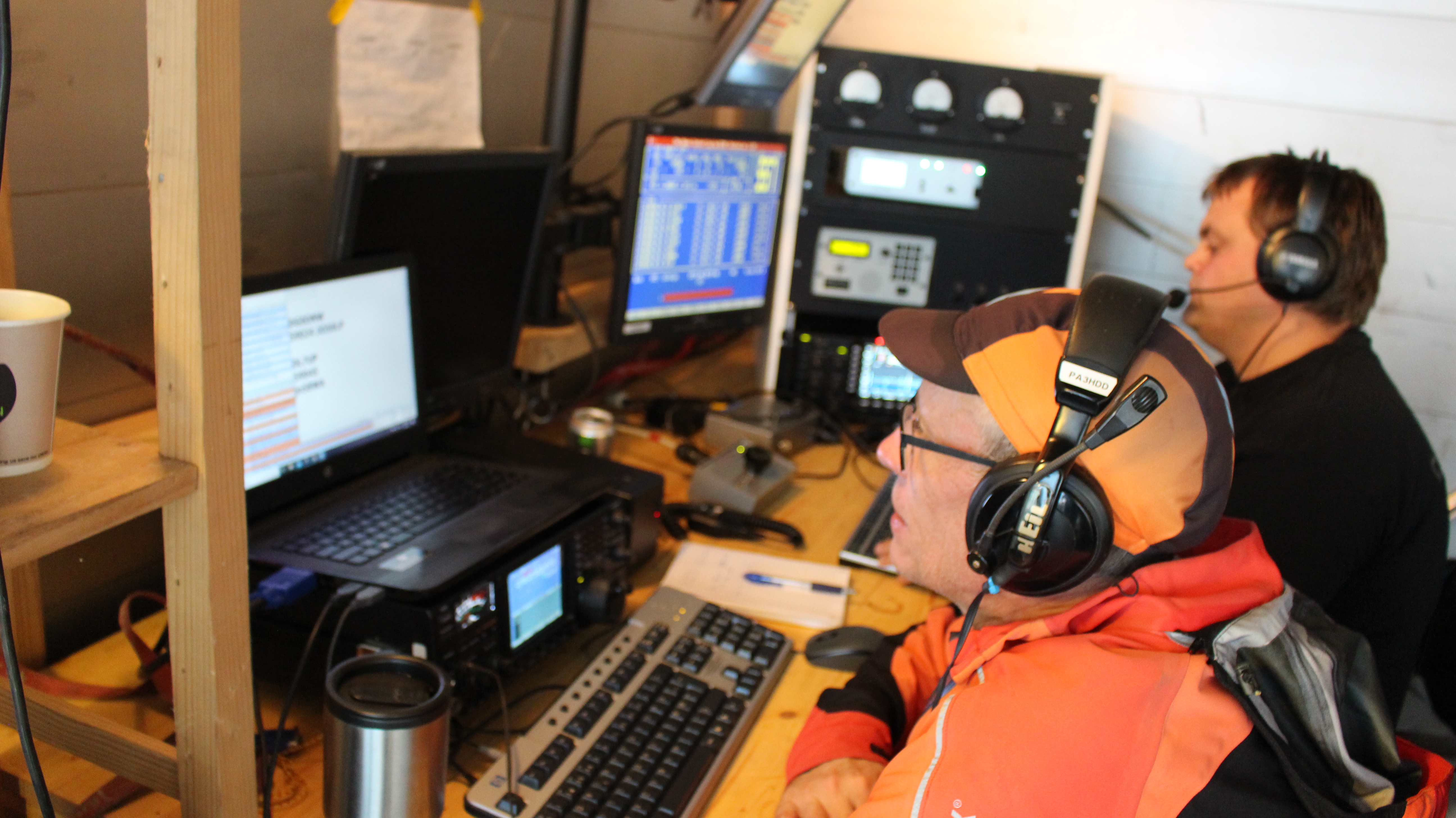 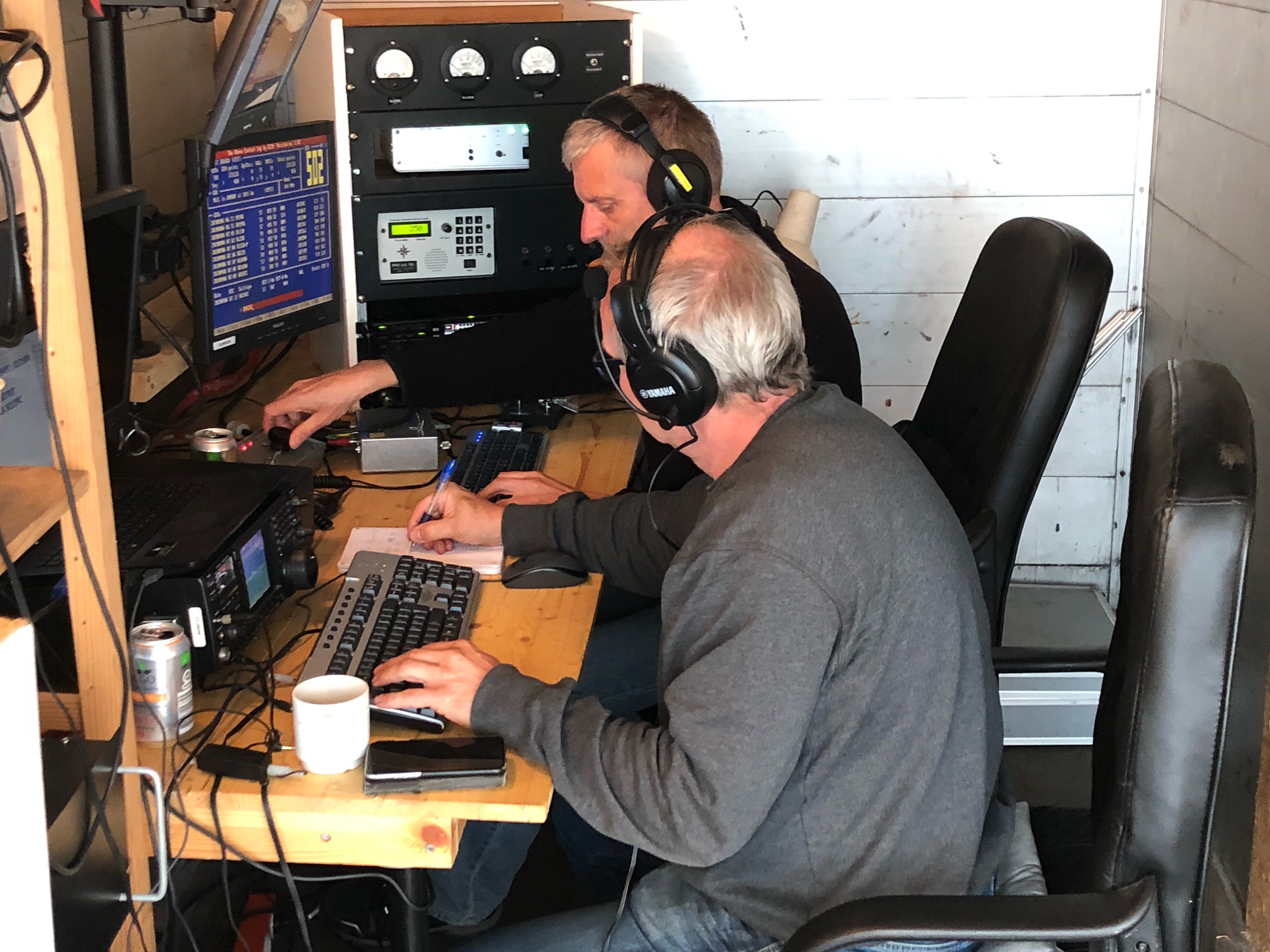 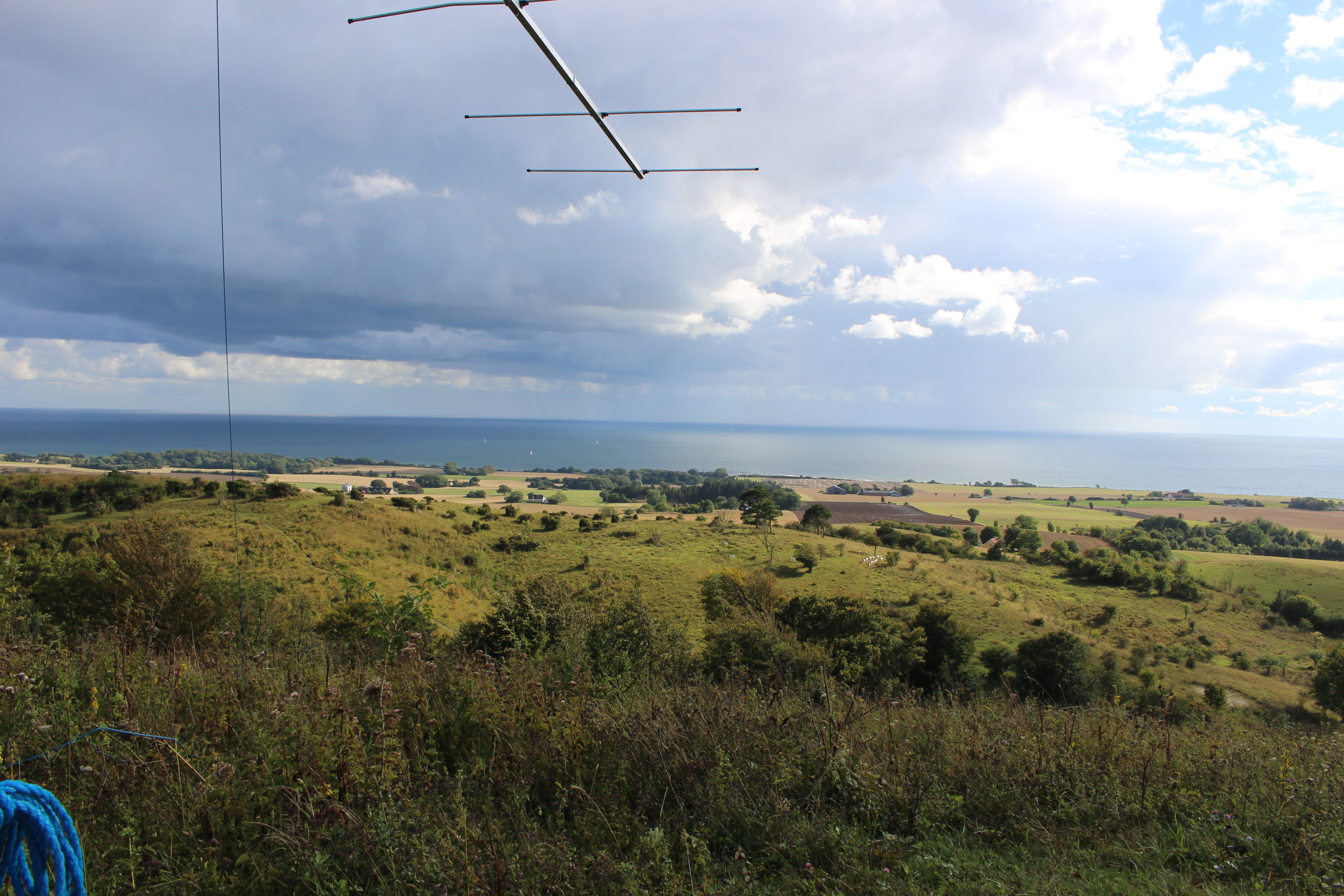 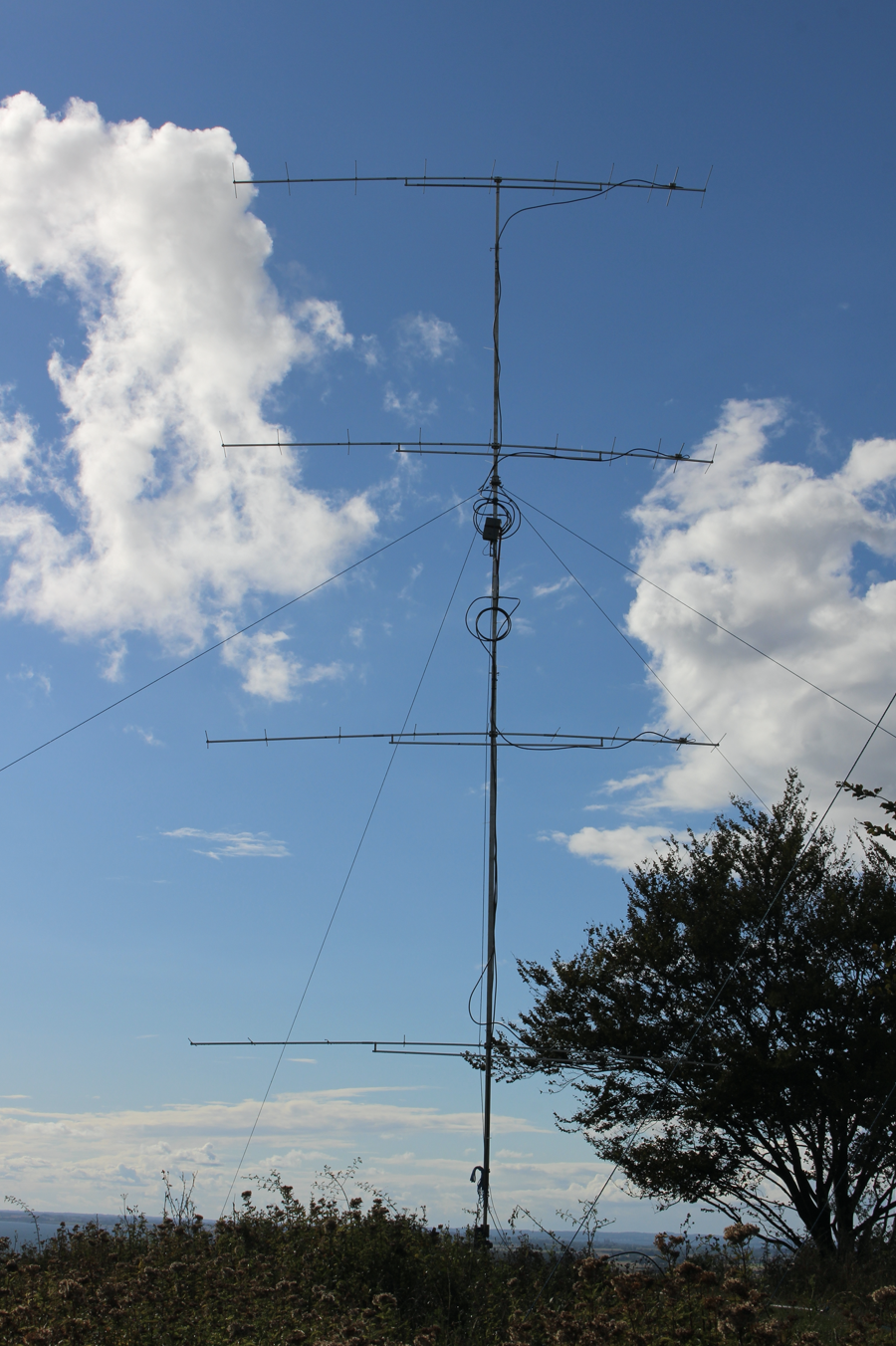 SSB (and CW) contest still rocks
A question that was on our mind before the contest was about the activity. Would the covid-lockdowns and the strong rise in FT8 activity result in less interest for SSB contesting? Apparently not at all. During the contest there was no sensation of less activity just as we had many new callsigns in the log. Likewise, for CW during the night hours the activity did not seem lower compared to previous years. This can also be seen in the reported results from the other participants, with the QSO numbers for the top 10 stations above average.
Thus, are the fears of the “all-consuming FT8-monster” without reason? It appears so for contesting, at least for the time being. The reason is probably not only that SSB QSOs are faster, but it really shows the difference between an analog and a digital QSO. For FT8 there is no pile-up thrill, no feeling of connecting with the operator at the other end, no 4 QSOs/min and really no personal operator skills at play when working FT8. It works great for DX monitoring and weak signal QSOs, but for contesting FT8 is simply boring compared to a hot SSB contest. Which is absolutely just fine.

Lessons
There were to many minor and some larger equipment failures that cost us the last 10-20%. Even tough we tested all equipment back home; this does not replace a full-scale test in the field. On top of this we probably had accumulated too many small repairs and maintenance tasks, which together resulted in major PA and relay failures.
Anyway, we had a great weekend, fun radio and good company. It was good to be back on air!

Thanks for all the QSOs and see you next year. 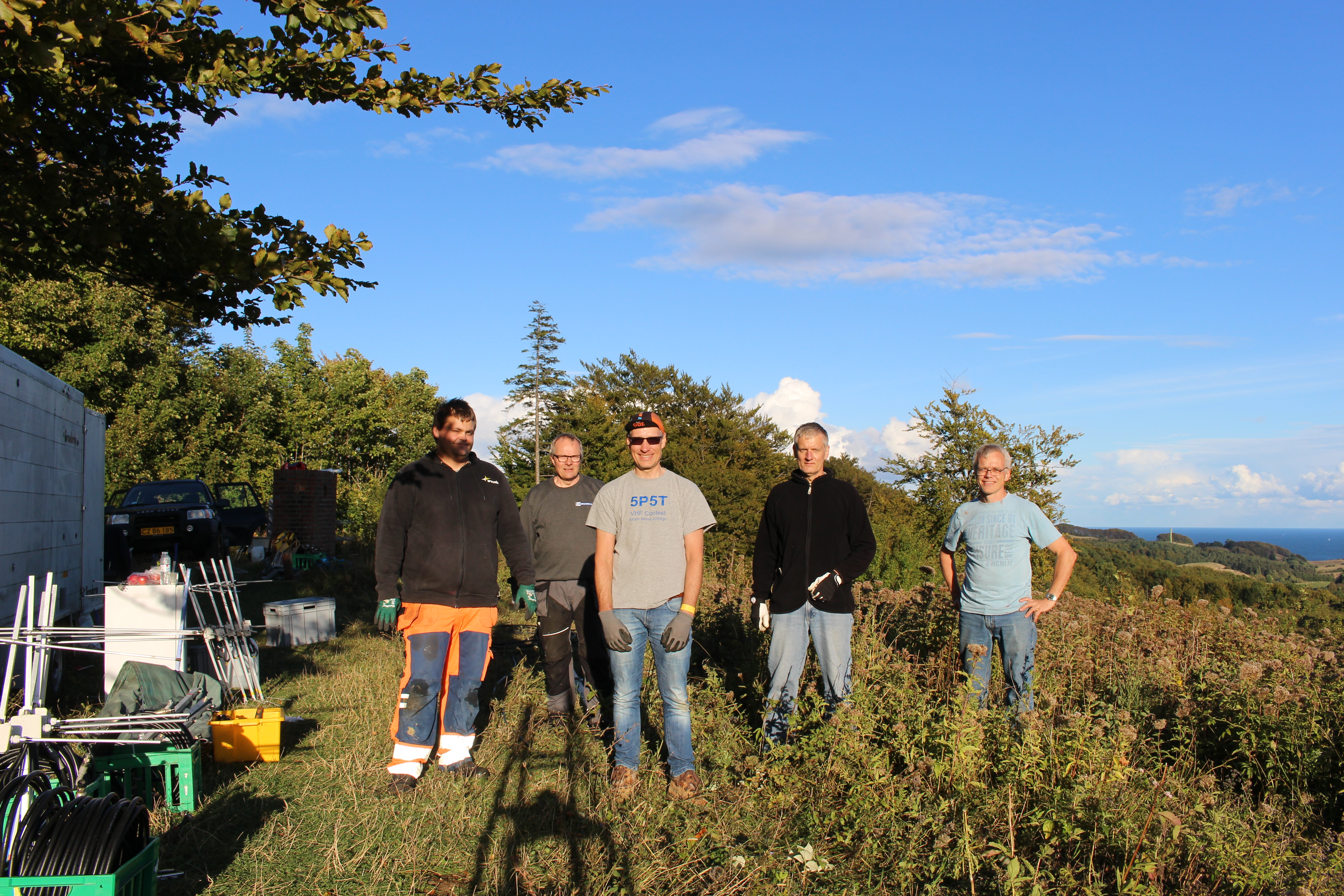 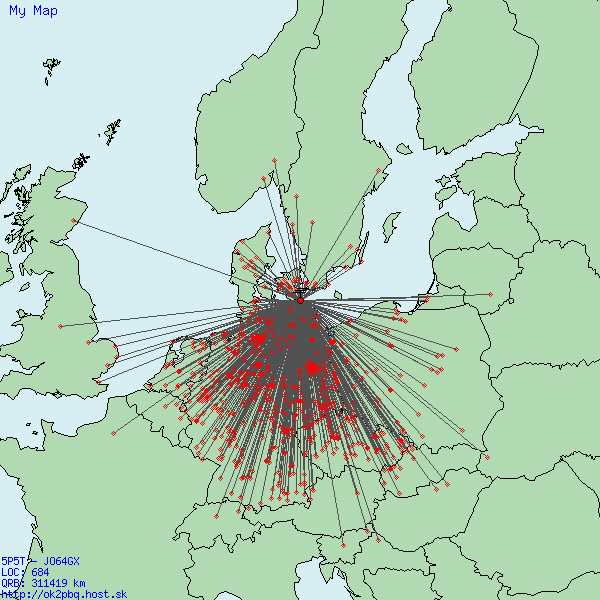 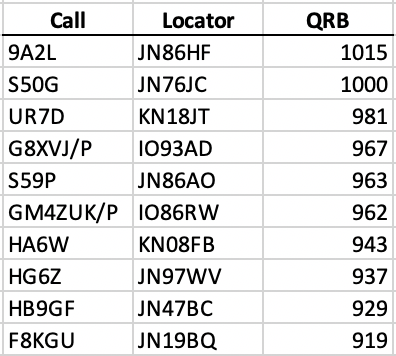