In 2018 we had a major redesign of our antenna system inspired by a lecture given by Henning DF9IC at the Nordic VUSHF meeting, where he described how DR9A had redesigned their multi-antenna system to obtain a more uniform radiation pattern. The idea on our side was to obtain a more homogenous pattern of radiation by phasing our 8x3 el antenna systems. Having 3 systems in phase would in theory enable us to cover from 90 to 270 deg. Lots of time was spend in the summer of 2018 to rebuild, extend and redesign everything, but the final test during the contest failed because some of the driven elements were not in phase. Read the full story of the 2018 phase-disaster here. The antenna setup prior to 2018 and 2018/2019 is shown below. 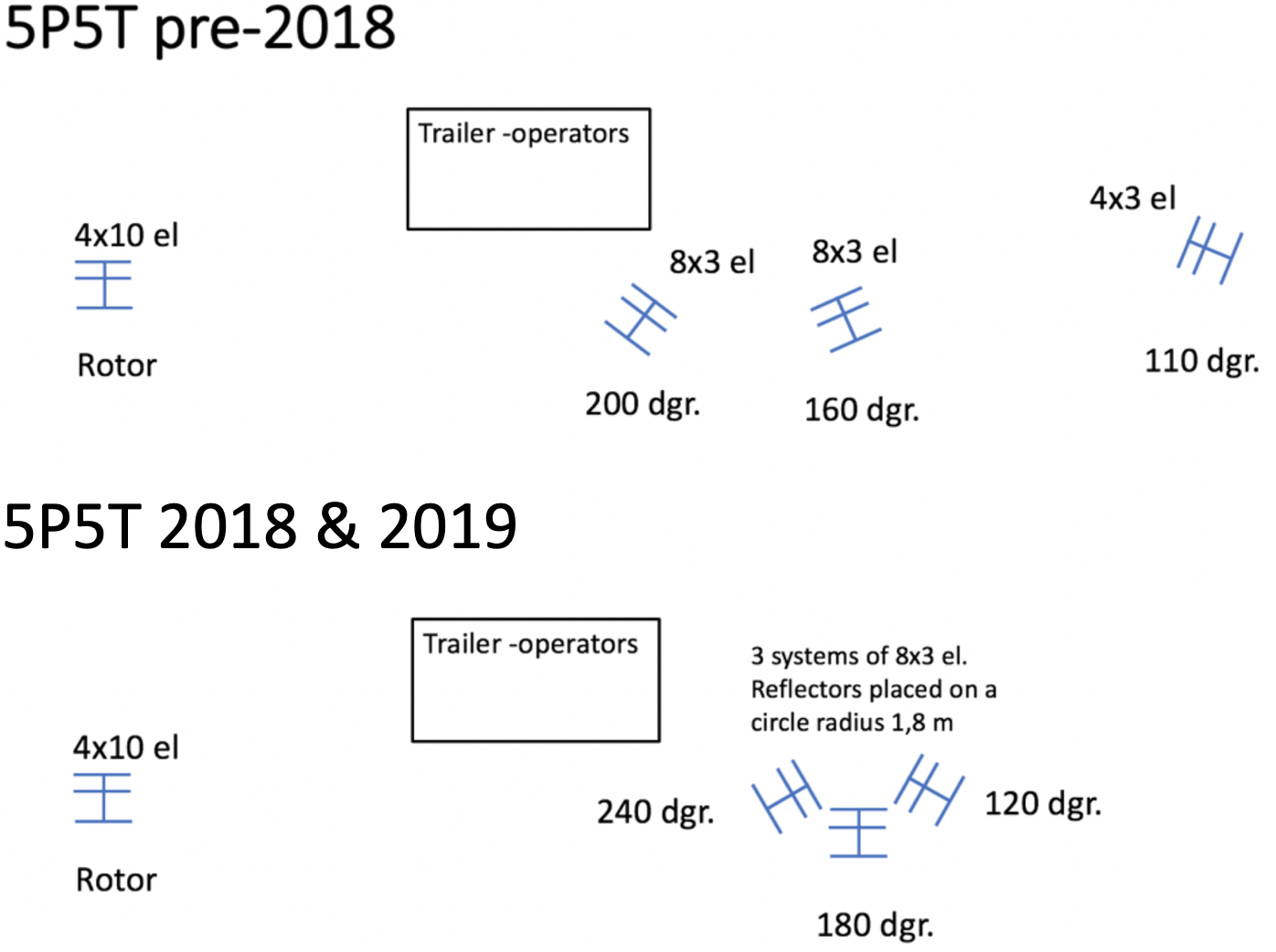 Figure 1. 5P5T antenna setup. distance between 4x10 and the phased system is approx 25 meters. Drawing is not to scale.

For 2019 the strategy was quite simple. No more changes to the setup, focus on getting the new antenna system up in the right order and in the right phase. OZ1FDH and AG6QV spend a weekend checking all antennas and cables, and all that was left was to wait for the date of the contest.

The weather outlook was not good. Until a few days before is looked like constant rain and strong winds from Friday evening to Sunday evening. The rain gear and boots were all packed and ready, but luckily the forecast brightened and all there was left was a few light showers.

All equipment was loaded on Thursday night. The trailer and land rover were ready to go, everything seemed to be there, nothing forgotten. All left was to hook the trailer to the old landrover and take off on time Friday morning. Just one final check of the tire pressure on the trailer remained. Soon the sound of hissing air from a defect valve filled the air, followed by a realization there was no spare tire. The friendly neighbor had spare tires in all sizes for tractors but none that would fit the trailer. Not much you can do but to show up at the local mechanic early next morning. He fixed it in 3 min and the trailer was back on all wheels. I can highly recommend Smørum Autoservice! 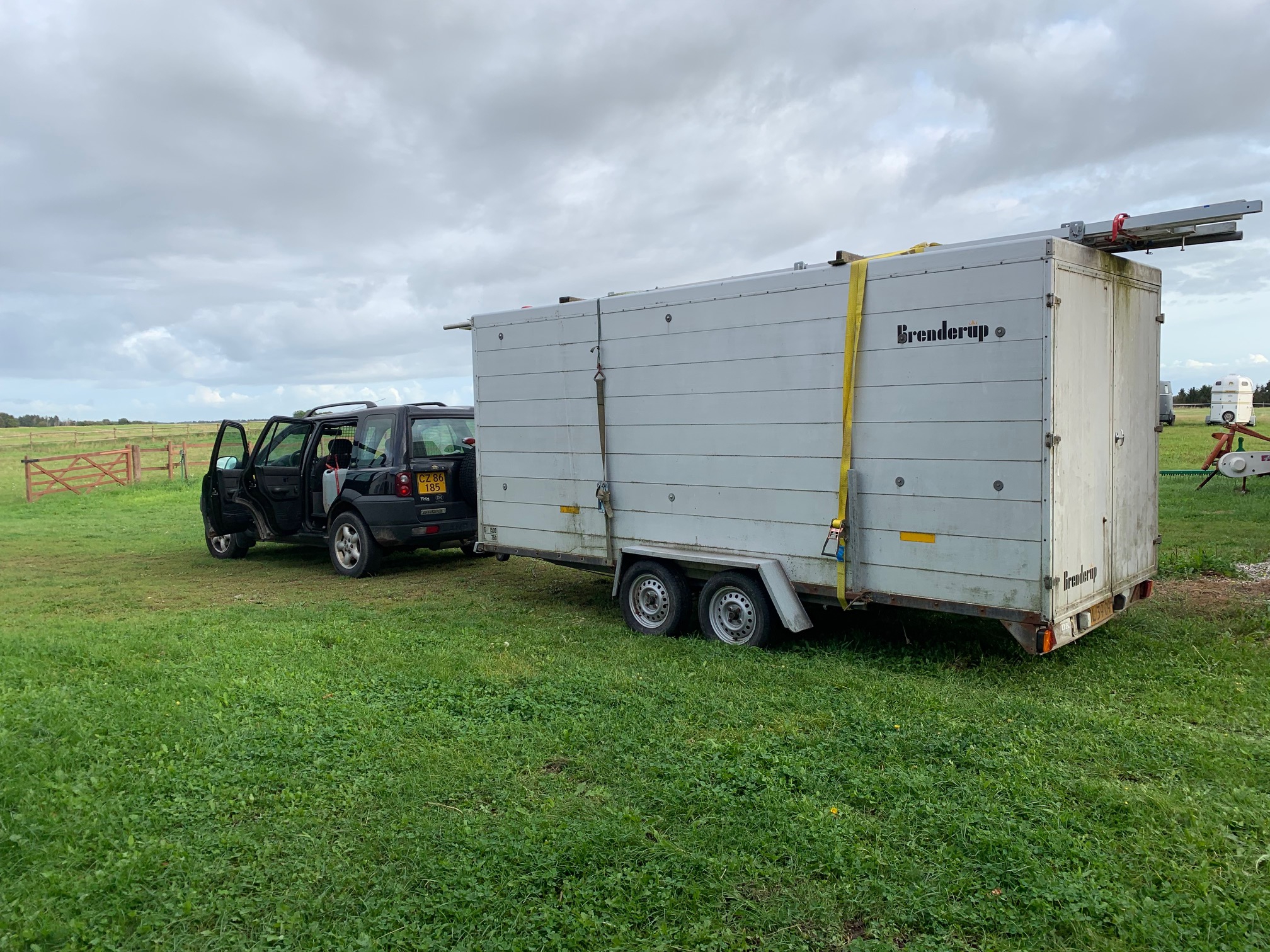 Figure 2. All ready for take off from JO65cs, next stop JO64gx

Next thing was to pick up Kenneth OZ1IKY at the local train station before we started on the 2,5 hour drive to Møn. Once there the 2 km drive through the forest to the top of Kongsbjerg was an extra challenge this year. The roads were in a bad condition from very heavy timber harvesters and you had to navigate between bumps and ridges. Once on the top we immediately started setting up the equipment interrupted by the traditional lunch dish of fried fish and potatoes with a large beer at the restaurant in Klintholm harbour. The setup of equipment went without any problems, except for OZ1FDH realizing that he had forgot his extra lunch box. 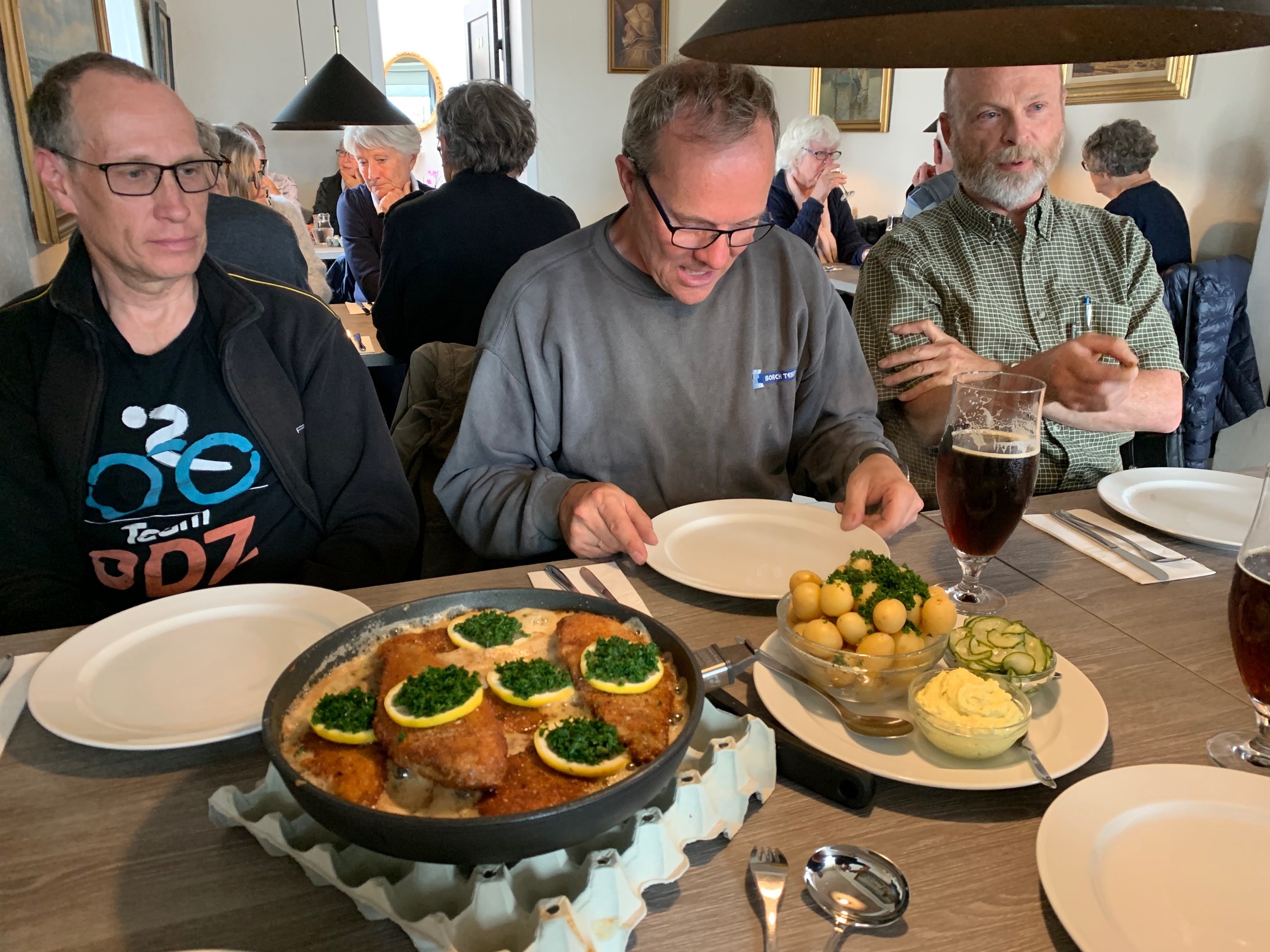 When we stopped for drinks (mojitos by OZ1IKY), dinner, music and dance on Friday evening, the 8x 3 el systems were all in place, and what was even more important all systems seemed to be working as opposed to last year. 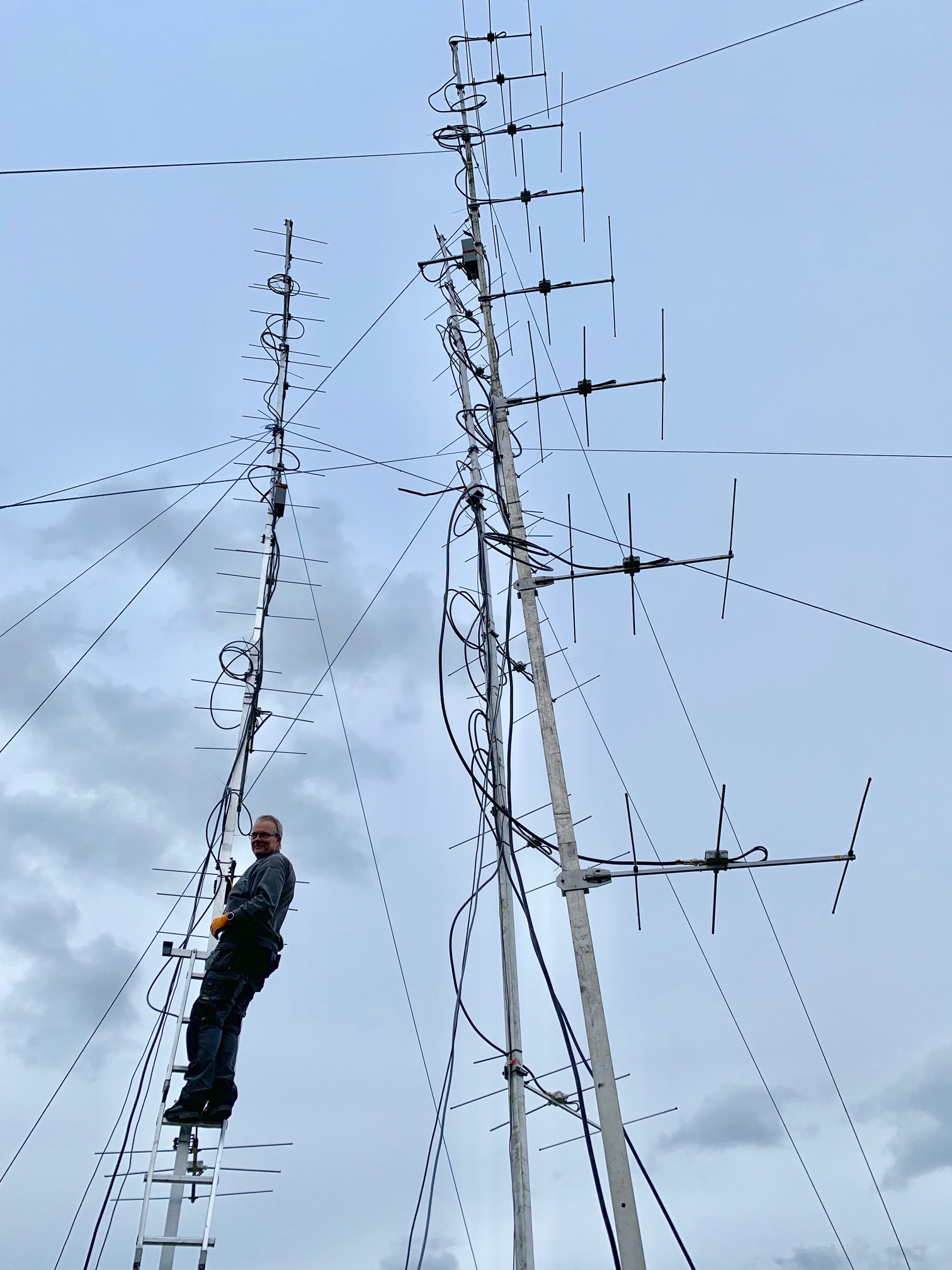 There was a little rain during the night, but when we all rose Saturday morning the sun was shining with no wind and a fantastic view. Even tough that Kongsbjerg is only 134 m ASL it is pretty clear that the take off from 90-270 degrees is near perfect. 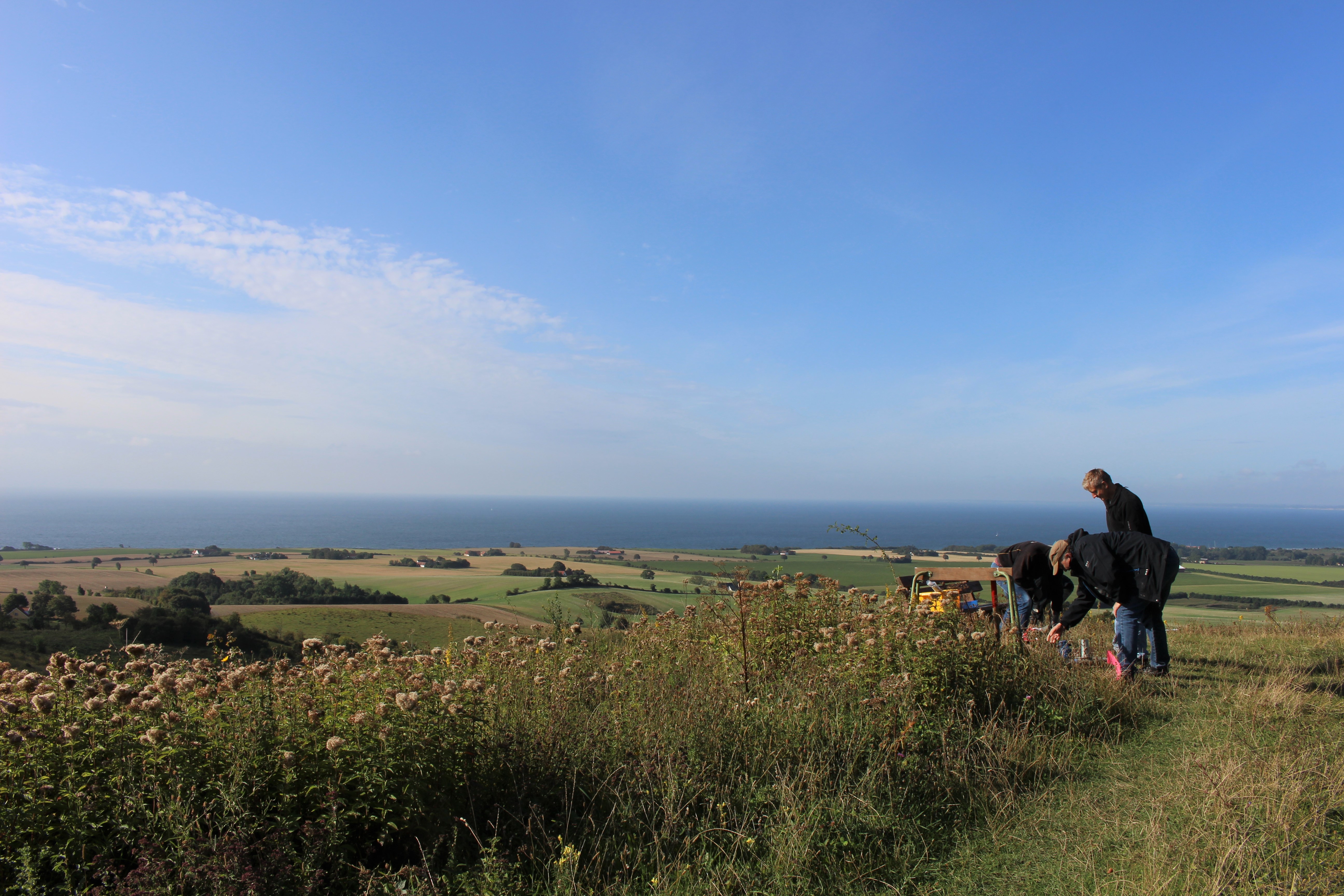 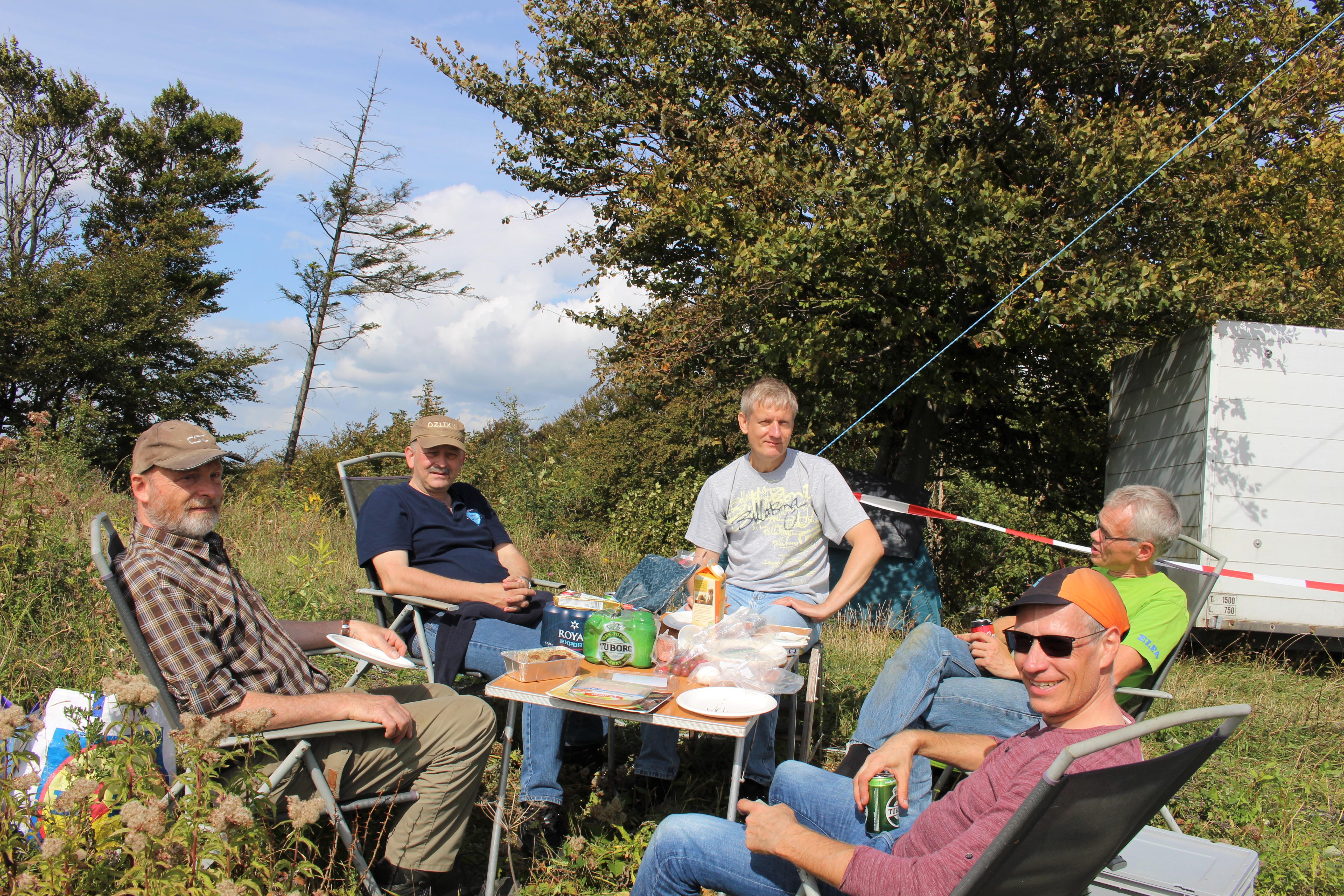 We has some issues with the automatic CQ but all was ready for 14 zulu with PA5DD and OZ1FTU as the operators. The contest start, it is the climax of all preparations, thoughts, planning and work. Provided that the equipment does not break down, there is not much you can do to change anything in these 24 hours except rely on good coffee and your team´s operating skills. All other factors such as the activity level, conditions and stormy weather are factors that you cannot change, and it is only hard work and a little bit of luck that determines your outcome. 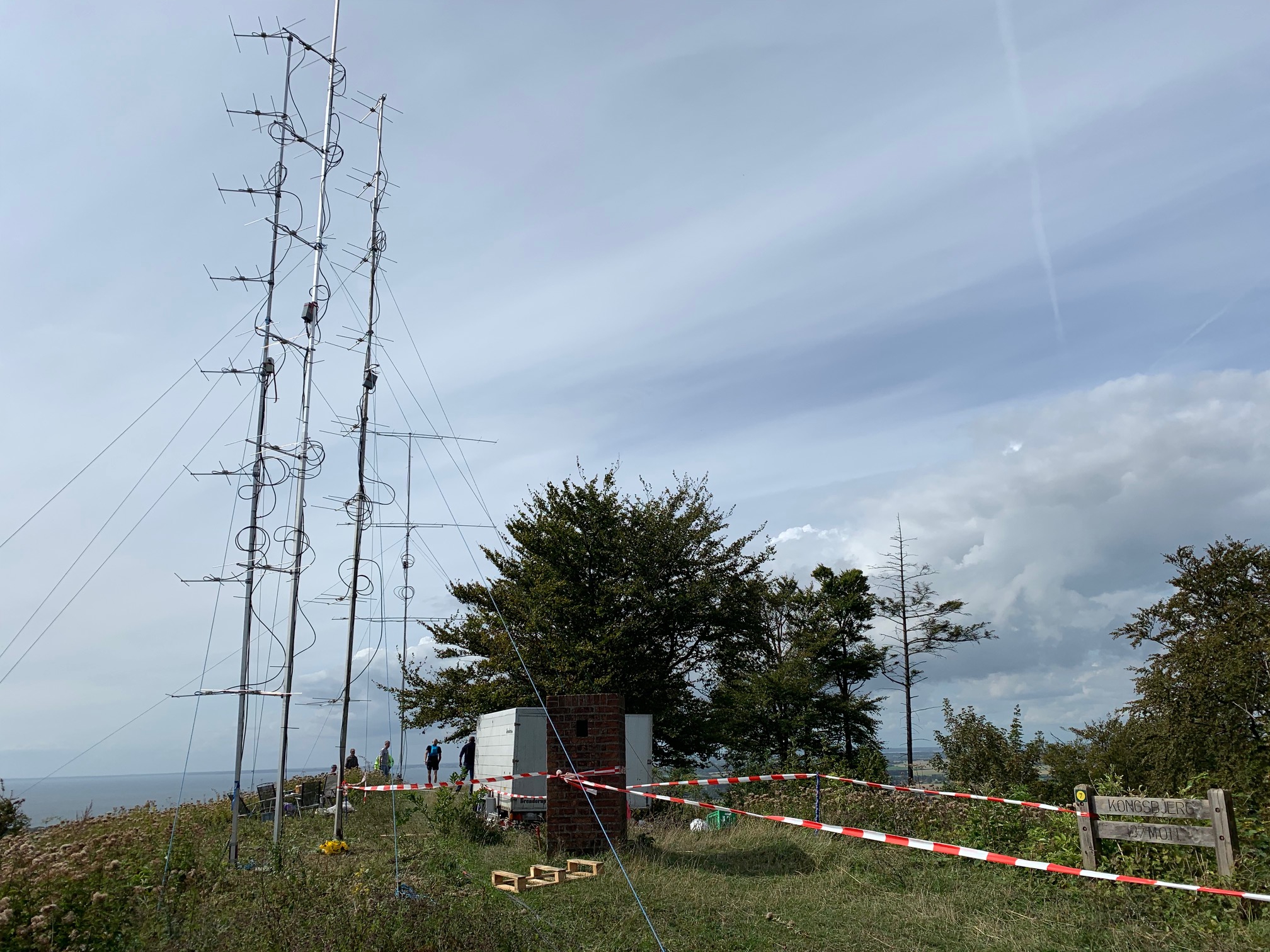 Figure 7. All set up and ready to Rock'n Roll

The first hour gave 88 QSOs, which is in the average range from up north. We managed to keep the 1 QSO/min for the first 5 hours. Conditions were pretty flat, but signals were OK. GM4ZUK/P was booming across the North Sea but otherwise the signals were not strong. ODX was S59DEM 1032 km, it took some patience from both stations but we managed. UR7D at 981 km was easily readable almost the whole contest they sure have a nice stop and QTH. The most funny QSO was with HB9FAP, we both had the same QSO number 419, which created quite some confusion on both sides. There was the usual decrease in activity in the late hours, but Sunday produced a higher QSO rate than expected, was it the phased antennas performing as intended? A nice number of SM stations in the log, 34 as compared to 26 OZ, and quite a lot from even further up north. We also managed to to work DL/OZ1ALS who were QRV from a parking lot with 1W and a HB9CV on their way back from Weinheim -not their usual setup 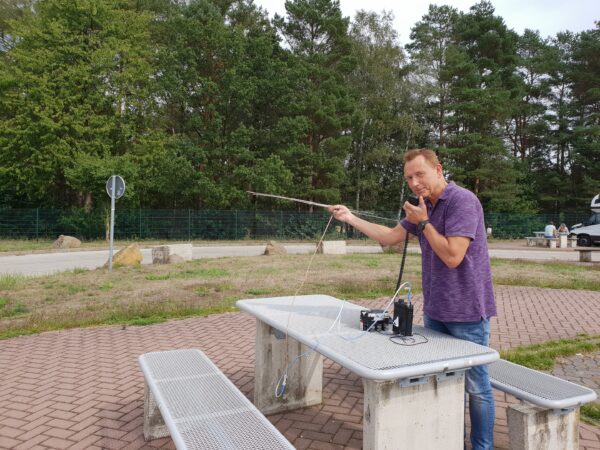 However, placing the Weinheim meeting on top of the Region 1 contest is not a good idea. The final result was 712 QSO and approx. 341000 points. Looking at results from other stations it is not a bad result, and considering there poor conditions, it may even be quite good. 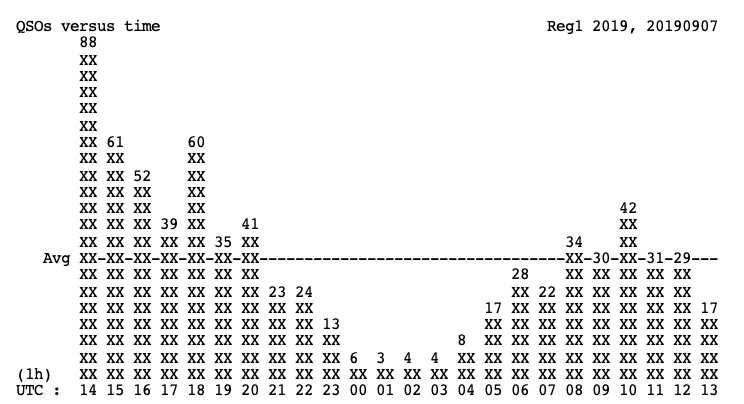 At about 01.30 zulu it was time for a change of the guards, waking up PA5DD and OZ1IKY. Before turning in for some good hours of sleep OZ1FDH checked upon the generator. Everything looked in good order, apart from the low fuel warning sign flashing! The fuel tank was almost empty, we had underestimated the fuel consumption. It was no time for sleeping, and OZ1FTU and OZ1FDH had to go looking for a gas station in the very early hours. A nice thing about the QTH on Kongsbjerg is that it is quite isolated, a bad thing about Kongsbjerg is that its is quite isolated -especially when you need fuel early on a Sunday morning. Having only a 10 L can it wasn't enough with 1 trip only, thus it took a couple of extra hours before OZ1FDH and OZ1FTU could get a little rest.

Did the antennas work?

The big question was did our new phased antenna system work? By phasing the antennas and placing them next to each other in a way that provided a more uniform pattern, the hope was that we would have a 180 degree coverage with no -10 dB dips in the radiation pattern. The original EZNEC simulation done by OZ1GER showed a clear improvement when comparing the radiation pattern of the new and old setup. But how did it work in practice? 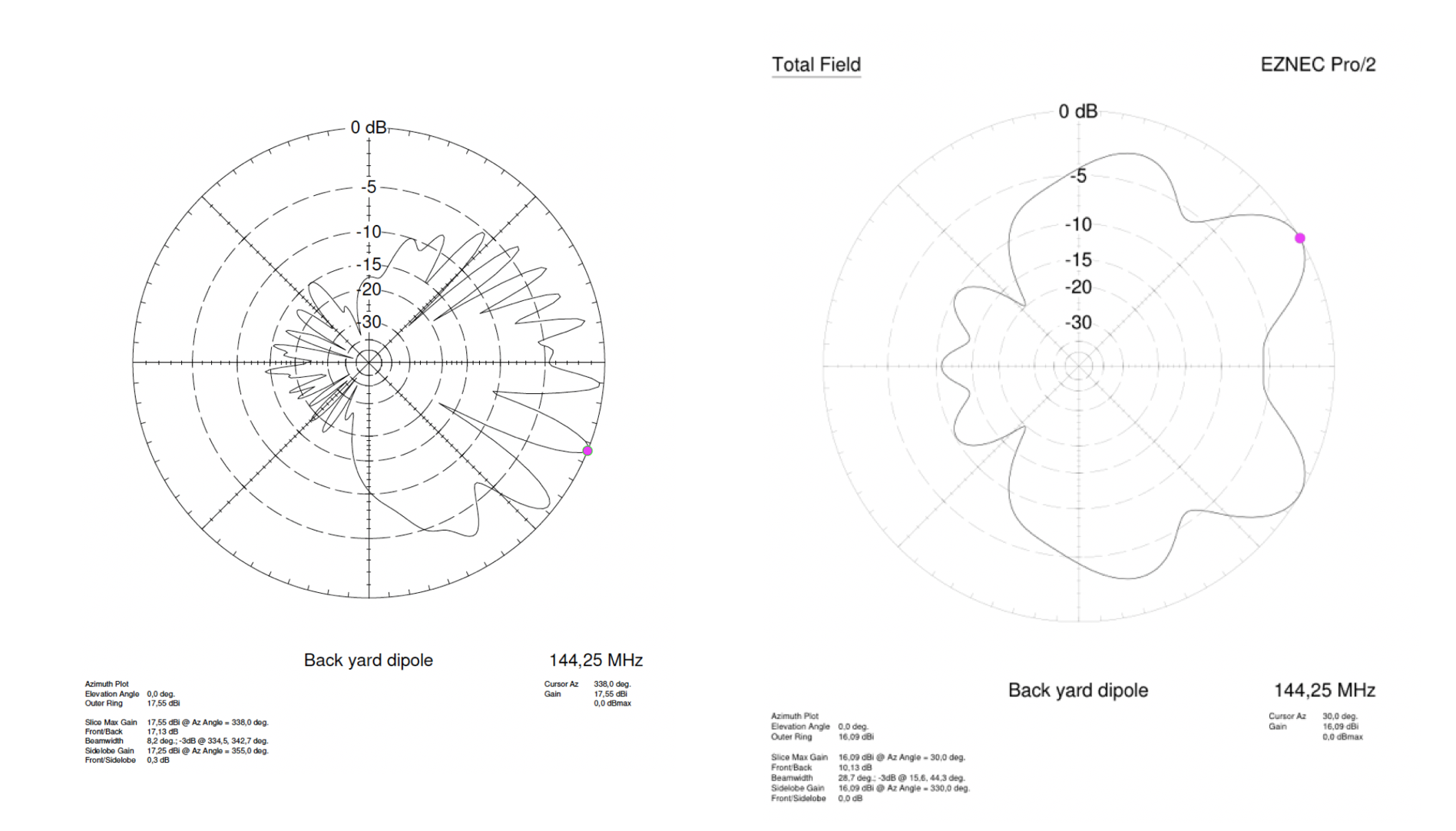 The short answer is apparently yes. Clearly we had a much broader coverage being able to work both LY and G on the same system. Also it appeared that we had much less need for the 4x10 el to pick up weak stations, indicating that the radiation pattern was more uniform. However, thesis only 1 year and 1 contest, no conclusions can be made on one observation only. Conditions were below normal and the QSO number was at an average level. From a statistical point of view at least 2 more observations is needed, but it sure felt like the phased antennas did their job, and did it well.

2019 was a good year. No major equipment failures, nice weather, good company and exciting radio. What's up for 2020? Probably we will not change the antennas, but we need to use a more updated log program than Taclog -even tough it is still excellent, its time has run out. We may work some more on the info that is feed to the operator e.g. ON4KST, equipment status and alarms etc. It could also be time for a new HF station in front of the DB6NT transverter. The Elecraft K4 could be a choice, provided it has a clean TX. 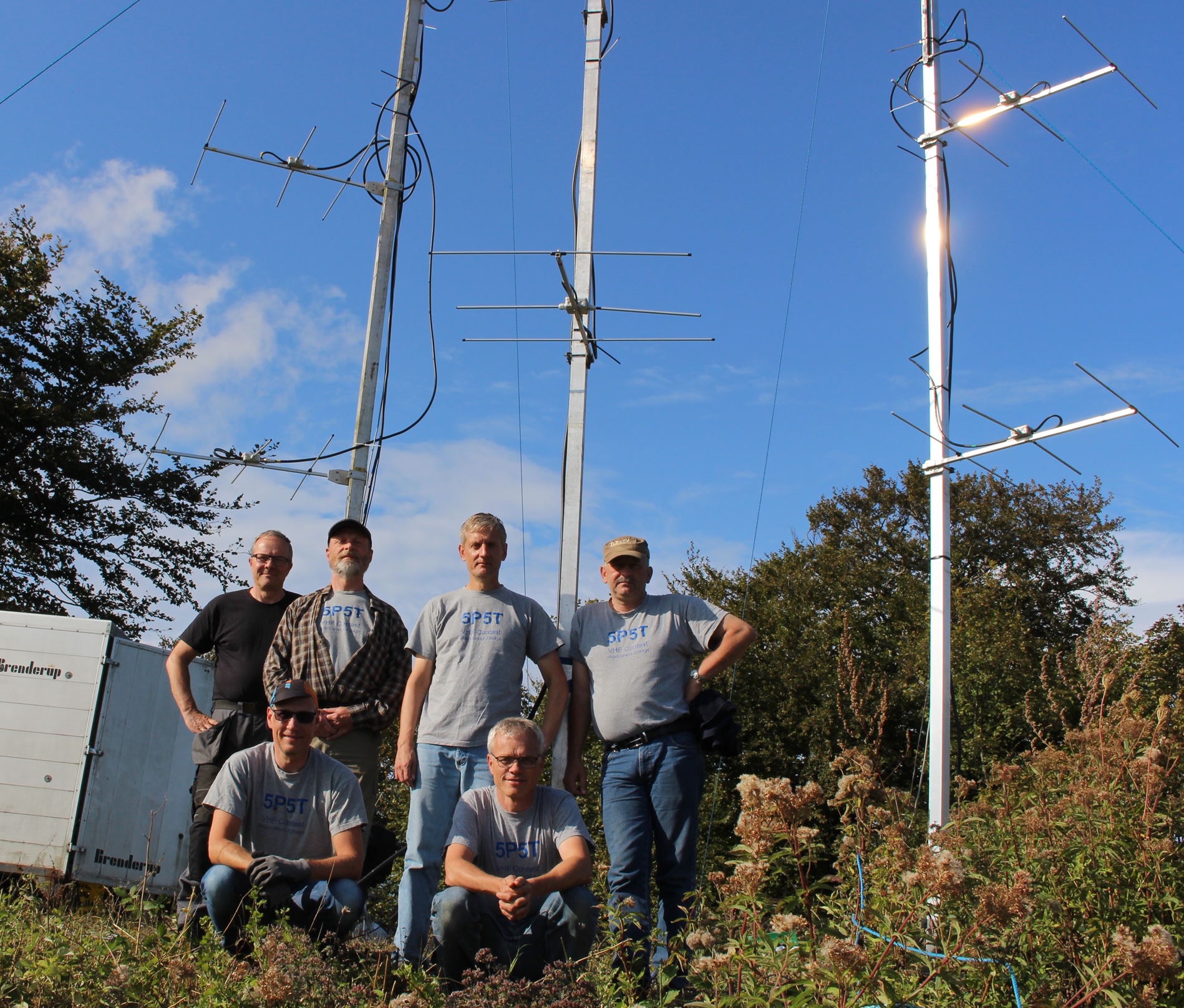 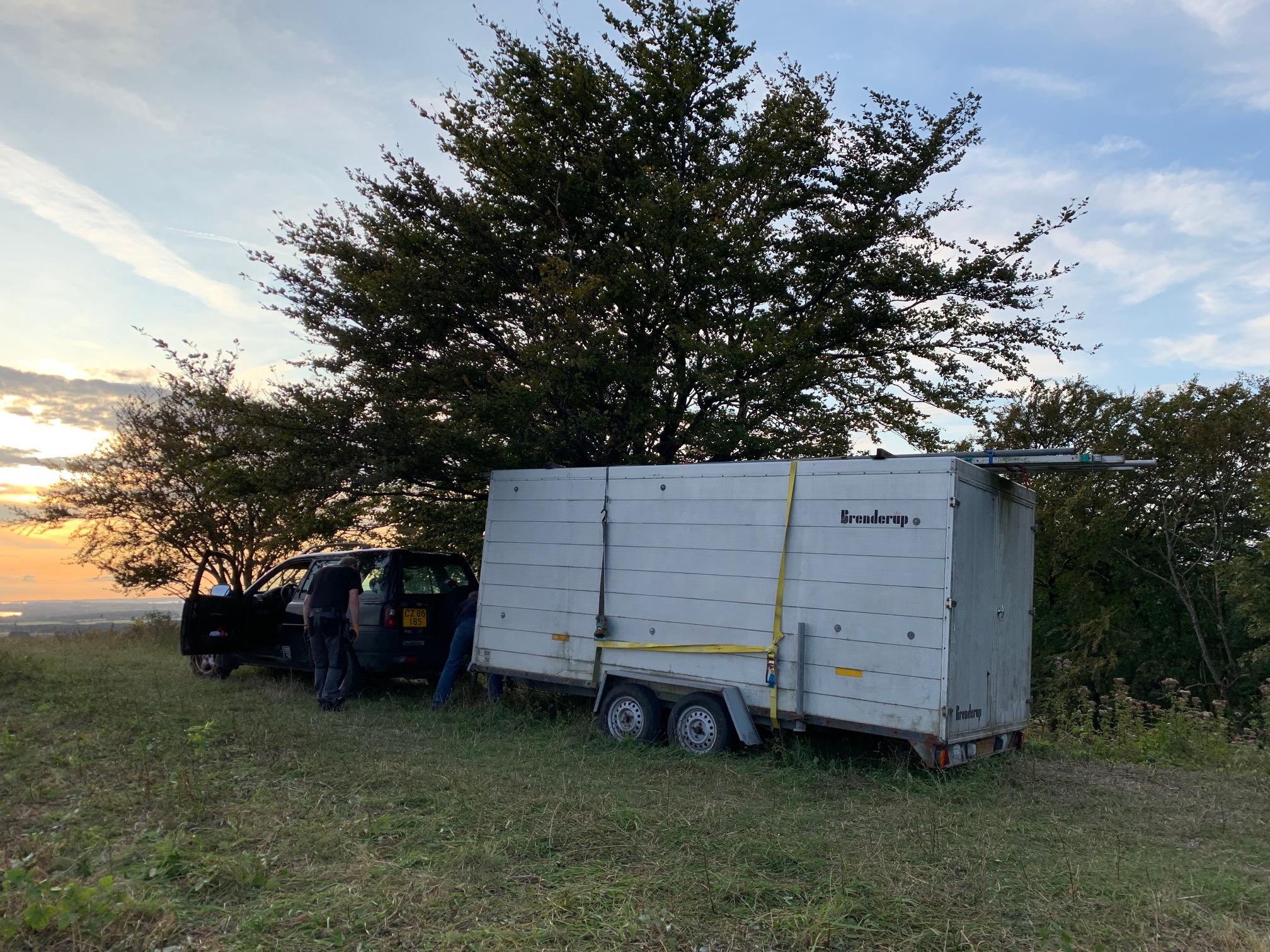 Figure 12. 17 zulu on Sunday all packed and ready to return to JO65cs
Statistics 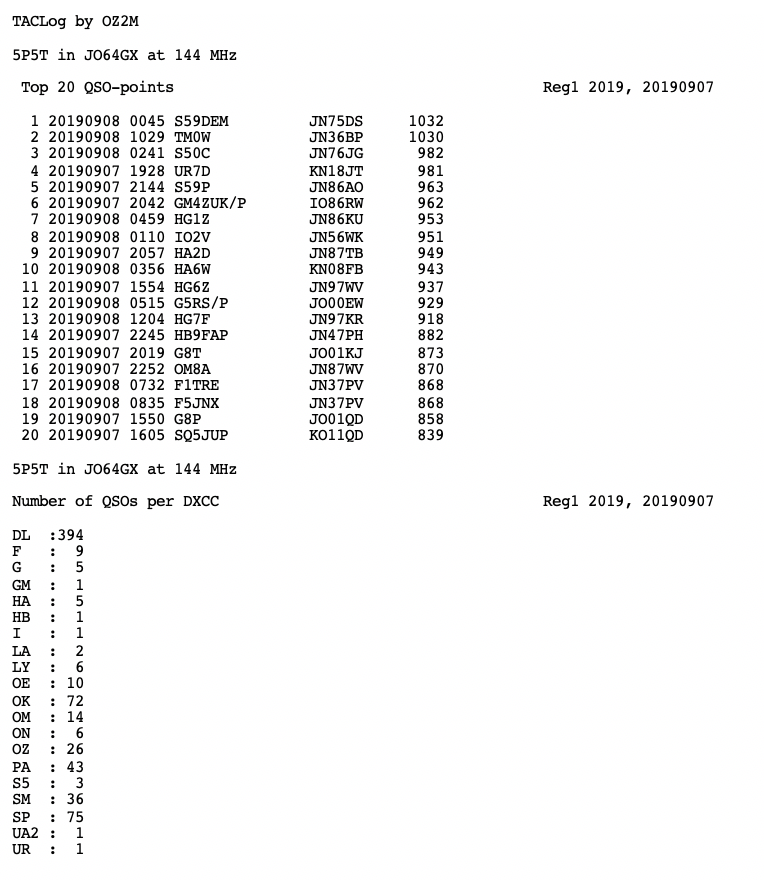